On the eve of the first “payout” by the NSEL to its members, the other parties (“defaulters”) who agreed on a settlement program involving paying over 30 weeks, with precise amounts like Rs. 174 cr. in each week for 20 weeks, have now not even paid in their first installment properly.

Of the Rs. 174 cr. expected, only Rs. 81 cr. has been received. Some have paid less than agreed, some have agreed to pay but not paid at all. Three have paid more than they earlier agreed. There are details, defaulter wise: 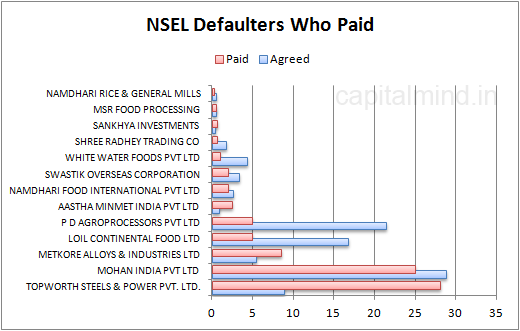 Topworth and Aastha have paid nearly 3x what they committed in the first week, Metkore paid 1.5x. MSR Food paid in full.

No one else met their commitments. The Peon-owned Juggernaut and Tavishi (that shares addresses with Mohan India) haven’t paid at all.

There’s a whole day ahead, but this is now insane. FMC needs to take over the process immediately.