Kirit Somaiya (ex BJP MP) has found that the directors of Juggernaut Projects, one of the lenders to NSEL are peons at Motilal Oswal, earning Rs. 8000 per month. (I got informal news that Motilal Oswal has said they are employed by a sub-broker but do not have a link to confirm).

Updated: Motilal Oswal has confirmed these are employees of a sub-broker, so are not related to Motilal Oswal. Thanks to reader Ramnik Chhabra for the link. (Sub brokers are franchises whose peons the main broker – Motilal oswal – will have no control over) 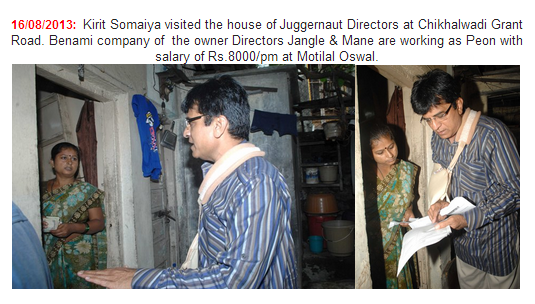 He has also filed a complaint with the ED.

FMC Beats Up NSEL, but tells it to return the money

Meanwhile, NSEL gets rapped by FMC in a scathing letter:

FMC has however said that the settlement plan should go ahead as scheduled.

This company has to receive Rs. 1160 cr. from the recent settlement.

(What the heck was an NSEL owned company doing as a player in the exchange? This is insane. If the exchange is a player, then what is the sanctity of any settlement?)

My take: Now FMC should demand all details of FT and MCX owned companies that are members of MCX. They should immediately be suspended from trading the commodity exchanges.

Further, SEBI should ask for such declarations as well.

FT stock has gone up 3% on the huge down day that Friday was, and MCX was down a further 3.7% to 244. While things remain in flux the stocks will stay volatile. However this NSEL thing isn’t quite over yet.