Trade data for July 2013 showed a fairly good change in the export/import statistic, with exports increasing and imports staying steady. The Trade Balance till July is -$62 billion, which is just 4% higher than last year till July (revised). This is good and perhaps how the system will readjust to a stronger dollar. That is, if the data is reliable, and I question that later in this post. 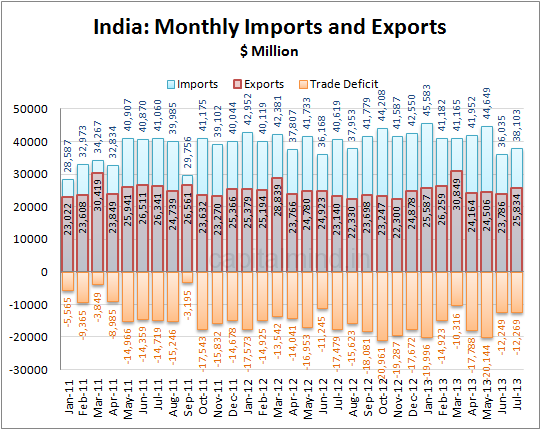 This is a little bit lesser than last year, and much can be attributed to the RBI rule of reducing gold imports, perhaps. I don’t have gold import statistics for July yet.

But the suspicion is that the data might not be reliable, since according to this data even oil imports are down 8% in dollar terms. But that can’t be right, because our import basket of oil was priced about 4% higher than last July (2012 July: $100.34 per barrel, 2013 July: $104.93) Has India were to have reduced consumption or imports by 8-12%? Consumption stats haven’t yet been updated but I doubt we see a reduction of this magnitude. If oil imports haven’t “really” fallen, then this data is wrong and will be revised. In effect the trade balance will probably be wider than we are seeing.

I’m not very inclined to believe these figures for this reason, so take all impact analysis with a pinch of salt).

The trade balance is still getting wider (in rupees, even if it’s not that much different in dollars, on a cumulative financial year basis); 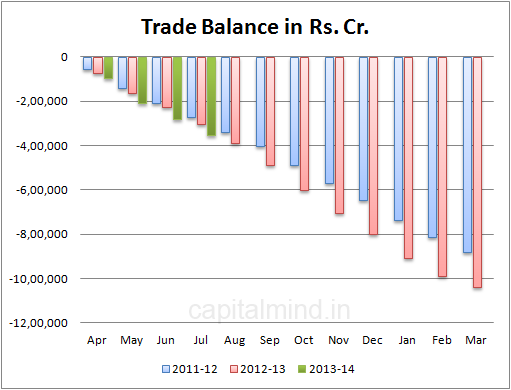 Impact: If the data is right, this looks positive. But if the data is right then we have reduced oil consumption by 10%. And that means we are producing lesser than earlier, and growing way slower. This means the economy is going to worsen before it improves, and that is a bad thing for equity markets.

India should get more oil from Iran, which will take rupees and thus those imports won’t hurt the rupee-dollar equation. We should indeed ask other countries to take the rupee.

However, if the government doesn’t try to use duct tape (like adding silly duties or further trying to increase the smuggling of gold) we will likely see the export-import equation gradually improving. The downward pressure on the rupee will continue till that breaking point is reached. Adding duties is dumb because we export different things from what we import; and we should focus on increasing the basket of what we can export, rather than reducing what we do import.

Given elections are coming in less than a year I doubt we can see forex inflows suddenly change to a big positive until there is clarity on how ludicrous the next government is going to be.