Financial Technologies is down 60% in trade today. The company owns a good chunk of broker infrastructure products (such as ODIN) and stakes in three exchanges – MCX, MCX-SX and NSEL. The problem child is NSEL – National Spot Exchange Limited.

NSEL has suspended trading in all contracts immediately, other than the e-Series (Gold, Silver etc). The circular goes like this:

1. Pursuant to directions issued by the Department of Consumer Affairs, Government of India vide letter dated July 12, 2013, the Exchange had given an undertaking to the Government and simultaneously, with a view to ensure orderly performance of the markets, introduced T+10 contracts with Trade for Trade settlements.

2. Despite this, there is a loss of trading interest in the market due to underlying uncertainties, which has led to trade in-equilibrium.

3. Under these circumstances and also in view of the grave emergency that has emerged in the market and in order to safeguard interests of all participants and market in general and pursuant to Bye-laws and Rules, the relevant authority is satisfied that continuation of trade in one day forward contracts, other than e-series contracts, is not in the interests of market and that, it is expedient in the general interests of the trade so to do, has decided as under:

i. Trading in all contracts, except e-series contracts, stands suspended until further notice.

ii. Notwithstanding anything contained in the Bye-laws or any contract, it has been decided to merge the delivery and settlement of all pending contracts with effect from today and to defer it for a period of 15 days and consequently, the positions outstanding in the contracts will be settled by way of delivery and payment after expiry of 15 days.

iii. A revised settlement calendar will be announced for contracts due for settlement after such 15 days period.

FT’s earnings were driven largely by NSEL profits, it seems. The Forward Markets Commission (FMC) found recently that the exchange allowed intra-day trading in a spot market, instead of forcing all players to take or give delivery. With a one-day carry forward, players could buy and sell (or intraday-short). The Consumer Affairs Ministry didn’t like this and asked them to stop these contracts immediately.

Volumes have fallen by 35%, looking at the recent trading history, and now when there won’t be any trading, income will fall.

However the bigger worry is their statement that they will defer all payments by 15 days. The exchange is feared to see defaults. Their CEO has admitted that over 5,500 cr. in outstanding contracts, but also that they have collateral stock worth 6,200 cr. so they are safe. The settlement guarantee fund (which covers defaults from counterparties on trades) is only 800 cr.

The stock market isn’t buying it. The stock has been beaten quite badly for the last month and today, at a price of Rs. 228, it is, quite literally, off this chart: 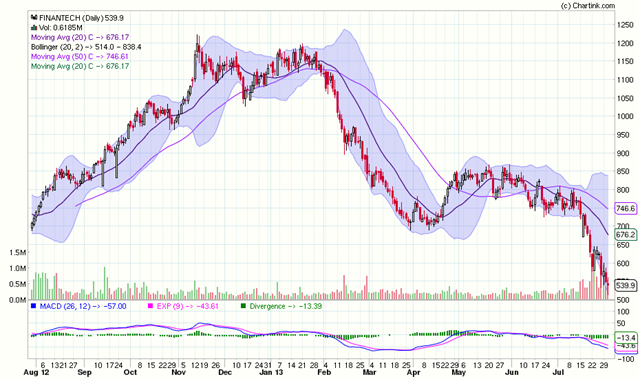 A related stock – MCX – is down 20% in trade today, at lower circuit. MCX is owned by FT and its a commodities futures exchange.