FIIs continue to be sellers in August, though in smaller quantities (till now). A quick chart: 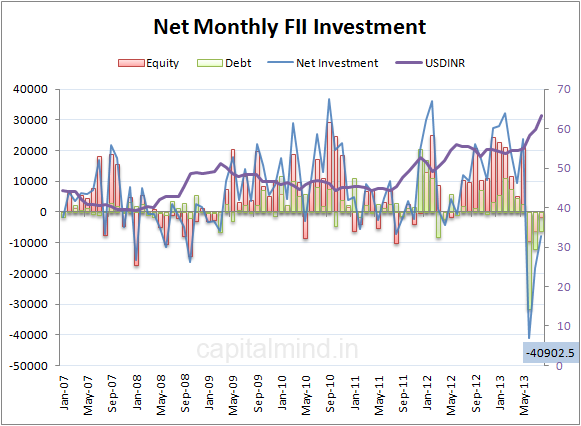 This is data till Wednesday. Thursday data will come in later today but it looks like they sold over 1,000 cr. of equities (cash) yesterday. 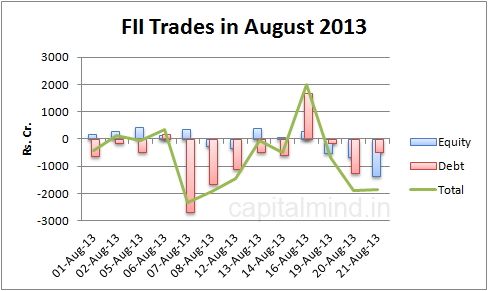 The dollar, though has declined substantially, touching 65.

I have always maintained that we have such a weak current account, that it doesn’t need large sales by FIIs to break the rupee. All we need is for the investment inflows to stop. And that was absolutely right – even as they slow down their sales, the dollar has depreciated faster because structurally we are in very bad shape.

Depending on investment inflows is okay for a while – so ECB, FCCB etc. are good. But we must use that money to build products the world wants, or even that India wants – so that we either can export more or use locally made products, both of which are a better “flow” metric than investment flows.

The fact that we haven’t done that has made even investment flows stop and now, reverse. Given that any promise today is hollow as there are elections in a few months, I don’t expect inflows to increase. And then, the slow train wreck of our current account deficit will hit us, piece by piece, every day in dollar depreciation, until we get capital controls. (That is the worst thing we can do, but we’ll do it because someone wants to be known for doing *something*).