Primary Dealers get an underwriting commission for every G-Sec auction (held on Fridays, most weeks of the year). These commissions have tended to be tiny – of the order of 0.35 paise per Rs. 100. (Which, for auction of Rs. 15,000 cr. is about Rs. 52 lakh – a trivial amount for a Bank/PD)

Underwriting commissions are bid for, a day before the actual auction. All Primary Dealers are expected to participate and have to underwrite about 3% of the total issue each. Together, Primary Dealers underwrite 50% of the total offer, and they can underwrite more if they choose as an “Additional commitment”. They are paid the commission regardless of whether the issue “devolves” – i.e. there are not enough acceptable bids in the main auction.

Remember, the last auction saw a HUGE devolvement, the second biggest ever. In such cases, the primary dealers will buy the securities instead, and then offload them in the market when they choose. But it looks like the last devolvement was kinda-sorta expected, looking purely at the underwriting commissions bid for.

The last two underwriting commissions have seen a spike. Not just a little bit, but a spike of over 200 times higher commissions! Let’s look at the weighted average commission 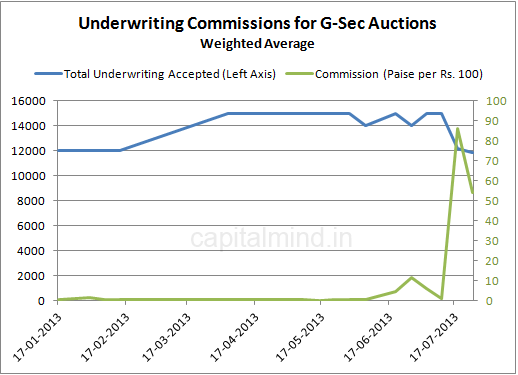 Notice also that most earlier underwriting sizes saw the whole issue underwritten (PDs only have to underwrite half – but they can say they’ll do more). Now, they’ve dropped the underwriting, as you see the blue line above.

That might tell you that today’s auction has a chance of devolving too. While the commission payouts are good, a devolvement will cause some action in the government security market later in the evening, when some PDs will attempt to sell the securities they’ve been forced to buy due to the underwriting. Last week, this worked in their benefit, as prices actually went UP after the auction. Will they be lucky this time?

Thanks to Dheeraj Singh for noticing this!