RBI has released the latest data for their House Price Index and it looks like the mad pace of real estate price growth has mellowed, but only slightly. Price growth at an all India basis is now 19% from last year. 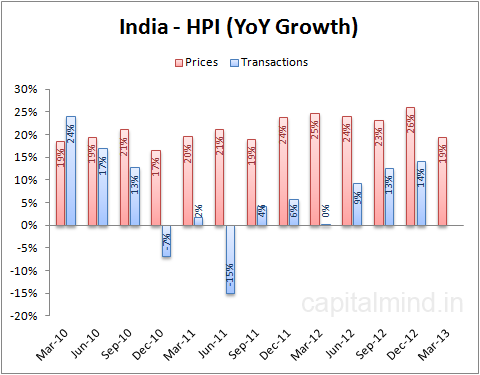 Unfortunately, RBI has not released information about transactions, so we don’t know if volumes are up or down.

Housing prices were very high last quarter as well, with prices up 26% year on year. However, every city is different; some cities seem to have slowed down price growth while others have picked up pace significantly.

Mumbai and Delhi Still Red-Hot, But Slower Than Earlier Quarter

Mumbai shows YoY growth of just 11% after a scorching 30% growth in the December quarter (year on year).

Delhi, though, continues to be in scorched earth territory, moving up 33% from last year. Prices have gone up an annualized 30% or more since September 2011, and the index has now reached 259 from a 100 in March 2009 (a compounded growth of 27%, the highest of all cities).

Chennai is now at 26% price growth and again, looks like it has gone out of control.

Kolkata has gone absolutely nuts with a 63% price growth, taking its own compounded price growth from 2009 to 27%, just behind Delhi.

Lucknow, with 29% YoY growth, is still among the fastest growers.

Note that the drop in transaction volumes in the previous quarter seems to have had no impact on price growth.

Jaipur prics are up the highest since December 2010 (on a yoy growth basis).

Ahmedabad shows signs of softening, though prices have grown slower in the 2010-11 time frame. 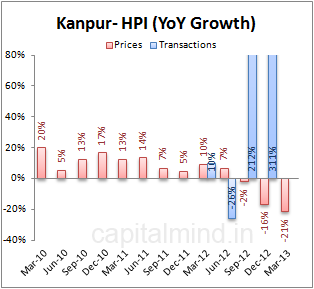 Kanpur shows a drop of over 21% on prices. Last time I was told of some inaccuracies in Kanpur in that much of the price is in “black” (paid in cash) and thus not recorded. 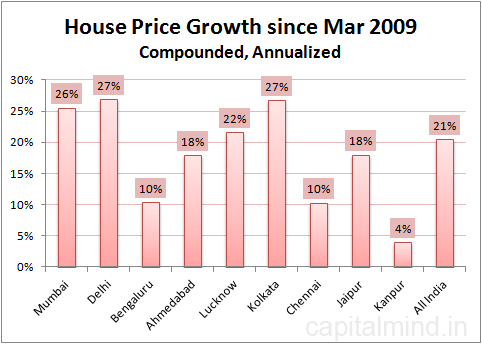 The bubble is intact.

But is the bubble bursting? QoQ growth is the second lowest since the data has been recorded – an all India QoQ growth level of 2.1% (versus 6.4% last quarter).

Credit will be constrained from July onwards, so it is quite likely that price growth is hit. Already, rental prices have flattened or reduced, and commercial rents and prices are down (speaking of the June quarter, from anecdotal information). A credit crunch could well cause developer defaults, and then prices will truly fall. For now, the bubble is well and truly visible.