A quick background: When banks lend money, they have to keep money aside as a provision to cover possible loss on the loan. This is tiny (usually less than 2%).

According to the guidelines, banks:

This is calculated by taking daily percentage changes in the exchange rate, finding the Standard Deviation over a year, and then annualizing that number by multiplying it with the square root of the number of trading days in that year. (Ref: FinanceTrain) 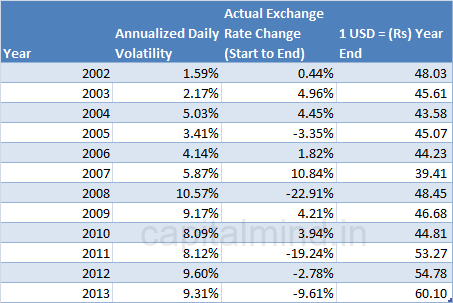 The highest  number is 10.57% in 2008, and that’s the number banks will have to take (unless 2013 goes even higher). Apply a 10.57% move to the unhedged exposure (whichever direction is more loss making) and see how much it impacts their profits.

This exercise needs to be conducted at least quarterly, and more likely, monthly if the exchange rate is “volatile”.

My view: This will hurt banks to a small extent initially, hitting their bottomlines as the impact cuts into profits. However they might increase the loan interest rates to corporates that are vulnerable.

For corporates it means loan rates could go up. However, some have access to bond markets and they might choose to go there for borrowing instead.

Who’s impacted? It will be the large FCCB borrowers (like Reliance Communications or Airtel or such) and the oil importers (HPCL, BPCL, IOC), and their banks. But that pretty much means the whole banking system.

Will it be useful? Looking at the graph it tells you that annualized daily volatility is not a great indicator of the impact. In 2008, 2011 and possibly 2013, the actual move in a year was MUCH greater than the daily volatility indicates. I would only suggest taking the higher of the two and then add another 5% buffer for fat tails. The incremental provisioning requirement is so small that loss estimates need to be much more realistic.

These guidelines are only in draft and could be changed.