More RBI measures to “contain the volatility in the foreign exchange market”. In addition to what they did to reduce rupee liquidity (increased MSF rate, cut repo to 1% of NDTL), the RBI has introduced two more measures today:

The first step is to reduce the amounts banks can borrow in the RBI repo auction (LAF), to 0.5% of their “Net Demand and Time Liabilities”. (NDTL). The NDTL is largely deposits for most banks.

Till today, banks could borrow upto 1% of the total banking system NDTL which was a limit of Rs. 75,000 cr. So if one bank decided not to borrow from RBI, it’s limit was available to other banks, since the limit was on the total amount borrowed.

Now they’ve made it limited for each bank. Anything beyond 0.5% will need to be borrowed from the MSF window (10.25%) or the interbank call/term money markets. The second one is no use when all banks need to borrow, of course.

Secondly, they’ve cut the repo limit to 0.5% of NDTL for each bank, and by simple mathematics, it means that repo is now limited to 0.5% of the overall NDTL of the system.

Since this is Capital Mind, you can’t make such statements without Deepak Shenoy throwing in a chart. Here’s the repo borrowing in the last year, with an orange line for 1% of NDTL (a limit since July 15) and a red line for 0.5% of NDTL (a limit from July 24 – tomorrow). Note: That long line was the 216,000 cr. + borrowing on that one day to take advantage of the delay in implementation of the last announcement.

The second step is about making the Cash Reserve Ratio less flexible. Like the moon, RBI liked to deal with things fortnightly. So the CRR is based on a percentage of NDTL of the earlier fortnight, and all banks need to maintain the average fortnightly cash balance with RBI as at least the amount calculated according to CRR limits. There is a caveat that the minimum to be maintained is 70% of the CRR. So technically, banks can put in 70% of the CRR for one week, and 130% of that amount for the subsequent week to average 100% in the fortnight.

That has now been moved to 99% of the required limit on a daily basis, so even this flexibility is now lost. This starts from July 27 onwards.

Again, in Capital Mind fashion, I place before you a chart of Cash Balance Actually maintained (aggregate of all banks), CRR required as an orange line,  and a green line for 70% of CRR (minimum). Notice the gaps below the orange line? They can no longer exist. 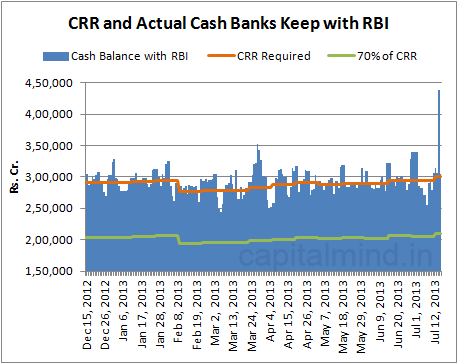 That also means excess cash will not be maintained at RBI. Excess cash can be given in as a reverse repo to RBI, so I don’t know why anyone would keep even Rs. 1 cr. excess with RBI.

Note: This is fairly strange. Banks are keeping Rs. 3,000 cr. to Rs. 6,000 cr. excess CRR with RBI. CRR earns no interest. Wouldn’t it be infinitely better to park the money in reverse repo instead? The annual interest banks can earn is 375 cr.! They have way too much money, if they’re too lazy to do this.

The third step is to attempt to pull money out of the system again, this time through an auctioned sale of Government Cash Management Bills of 28 and 56 days maturity, for a total of Rs. 6,000 cr..

Obviously such liquidity will come back after 28/56 days as these bills mature, so what’s the point? Remember, the RBI didn’t accept many bids in the recent OMO longer term bond auction sale, as it didn’t want to signal that it was comfortable with higher long term rates (the economy is weakening). Thus, the move to the short term, hoping things will tide over.

Equity Market Impact: F&O expiry is on Thursday so the impact may be subdued (too many positions out there). However, banks will fall. At this point (midnight) the US markets show no serious impact. IBN (ICICI Bank) and HDB (HDFC Bank) are about 1% down. INDY, the Indian ETF, is down just 0.43%. But honestly these are low volume counters – it’s the 9 AM tomorrow that will tell us much more.

My view: Cutting liquidity is good, as is increasing the cost of funds (helps cut inflation). But this auction thing is a waste of time – better to remove liquidity the same way it was created, by selling the dollars the RBI has.

This is also one of the best times to make the rupee fully convertible. What more crisis can you get? But the government is in no mood to even lift a finger.