Liquid Fund Investors have taken it on the chin with the fall in bond prices yesterday. Across the spectrum, for the first time since 2008, Liquid Funds have fallen around 0.2% on July 16, which is an annualized fall of….wait, let’s not get stupid and try to annualize a one day fall in bonds. Here’s the list:

Even a 0.2% fall is large enough to spook investors. Liquid funds are typically funds where you expect the NAV will go up every day, as long as the bonds that the MF has bought don’t default. And in general, rules allow mutual funds to “straight line” the NAV. Example:

This is okay in a one-off case. But what if, when the price falls, half my investors redeem their money? I will know of redemptions only after market hours, so what should my NAV really be?

Earlier, like Dheeraj writes, there was a “promoter put” in place – an implicit assumption that in such cases, the promoter of the mutual fund would take the hit and not allow investors to see losses. The promoter may buy a distressed security at the higher price and take it on his own books, like it happened when Deccan Chronicle defaulted on paying back a few mutual funds.

This is effectively the promoter underwriting your losses – a “put” option given to you for free. But obviously in a system-wide fall in prices, it will be impossible for any mutual fund promoter to take the hit.

Yesterday was one such case. Prices of nearly all securities fell. And it seems redemptions were a massive number, with many entities hoping that the “promoter put” will save them from action. However, it looks like Mutual Funds decided, all together, that they can’t have this happen – and so, all funds were marked down to the market.

Liquid fund investors will be spooked – after all you never really worry about loss of principal in what is supposed to be a safe investment, and here you’re losing 0.2%. But this spookiness is the correct thing – all investors need to understand that at the edge, there is risk. If liquid fund investors can stick around a little longer, they are likely to see a recovery (if the funds don’t have to sell the underlying investments, which will converge to par in a short while). But when patience does not exist, the hit has to be taken.

Take the largest Liquid Fund, ICICI Prudential Liquid plan (nearly 20,000 cr. in assets) and how it’s NAV has been hit. 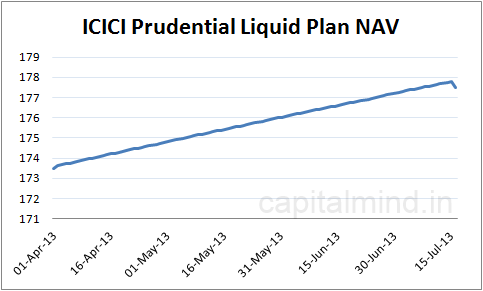 As you can see, things have fallen only a little bit – we’re back to about the levels of about 10 days ago. Put another way, it might be prudent to stick around a few days longer and not panic-redeem the fund.

If yields fall further – short term yields are now at 9.5% – these funds might just be a great place to put additional money into.

To help redemptions go through smoothly, RBI has allowed banks to borrow in a special repo window (temporary) at the higher 10.25% rate to lend to mutual funds (who can give the underlying collateral as security instead of selling it). Given that funds have marked their positions to market, they might not need such a facility, but it’s useful to have it, even if the rate is 10.25%.