When I wrote about the HUL Open Offer, I suggested that it would be better to have sold the stock in the market than to have tendered in the open offer. However, the best option seems to have been to wait for a month anyhow.

The stock went up nearly 10% yesterday. News is that the stock has been reweighted in the MSCI indexes and that the company has increased prices 15%.

I don’t really understand how this works, but the FTSE release goes like this:

But this is not a large impact. The investability weight has very little bearing on the stock. As a member of the index, it is only 1% even after this change. Additionally, other stocks like Bajaj Auto have seen a reduction in investability weight from 75% to 24% last year, without a significant impact.

The stock has broken all barriers. Today, it trades above Rs. 700. 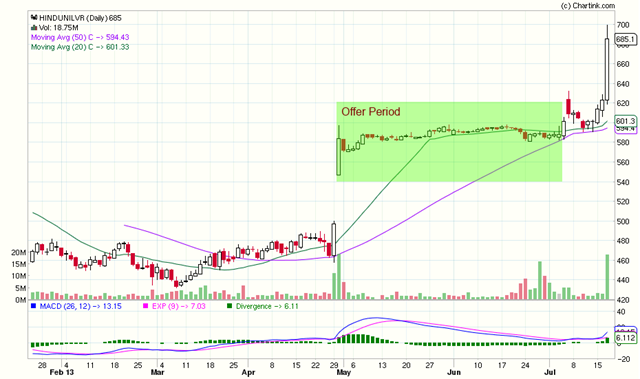 Nearly everything about this stock, from a technical angle suggests that it is in a strong uptrend. The MACD cross was only a couple days back and I would be wary of any short exposure on this counter. Of course, valuations are insane, for a stock that has shown growth of just 10% or so, but in the short term, sentiment will prevail.