It seems the US Federal Reserve said something slightly out of the ordinary, and our steroid deprived markets took this as a dose of major happiness, going up over 2% at about 12 noon, at 5,945.

Ben Bernanke said that the economy still needs a stimulus as long as unemployment remains high.

"A highly accommodative monetary policy for the foreseeable future is what is needed for the U.S. economy”, (Ben Bernanke,July 10, 2013)

This statement has been enough to drive markets up, after the fleeing of FIIs recently. It doesn’t matter that yesterday, people were saying that FIIs left because our economy was doing badly, we had lots of corruption, etc. Or that the rupee is sliding because we import too much gold.

In the end, everything depends on flows. If the flows resume, the rupee will recover and the Gold won’t matter and the corruption will be just a reason to buy media company stocks as they get viewership.

But this time, it seems like the markets are on edge. The move up is not led by the frontliners – FMCG, IT or Energy. It’s largely led by metals and banks, which have both been beaten down as investors pulled out recently. 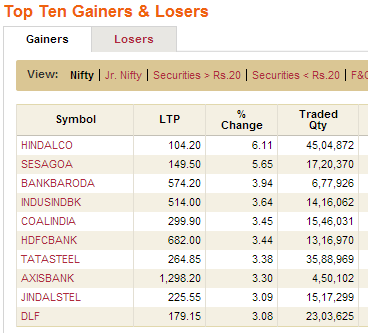 The Nifty is now over the 200 Day Moving Average though, so the bullish trend is in place. Infosys results are tomorrow, which should be good given the depreciation in the rupee and Mr. Murthy’s PR expertise. More data on inflation and IIP will come over the next few days as well, which will drive the course going forward. Is this a head-fake, or a sign of even more bullishness?