Here’s how the Nifty has fared including and without dividends reinvested: 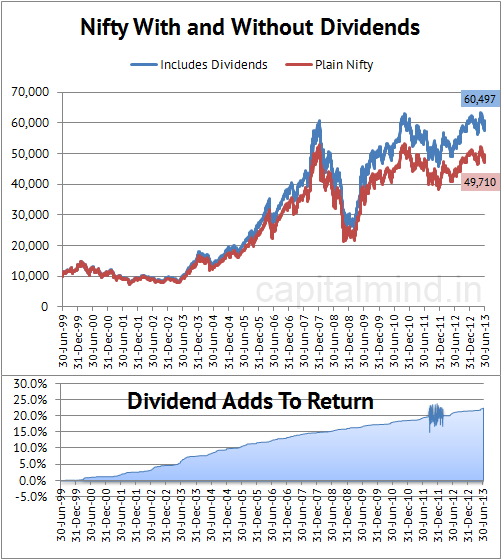 Technical Note: The Nifty itself removes dividends when noted. So when a stock falls post dividend, the Nifty is adjusted down appropriately. The Nifty “including” dividends, is called the Nifty Total Return Index, where it is assumed you would take the dividends you receive and reinvest them back into the Nifty.

In the longer term, you might think of rolling returns instead, and this is how the Nifty (with dividends) looks in that context: 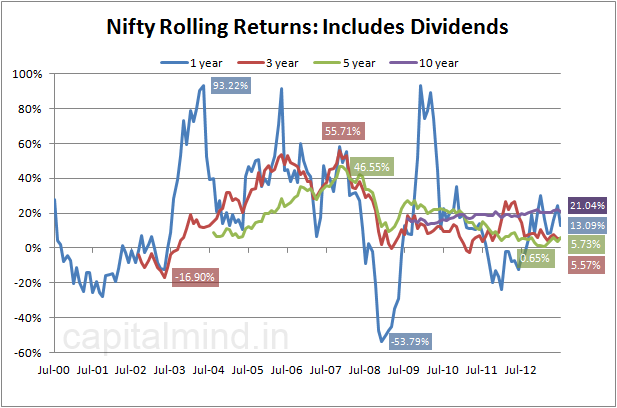 In the 3 and 5 year time frame, the incremental return over dividends is around 4% (since dividends pay 1.6%). The 10 year timeframe, though, is still above 20%. However we’re speaking of a low base in 2003; in the coming months and years, the 10 year return will need the Nifty to rise fast, as the Nifty started to move up rapidly post 2004.

Dividends are good for cash flow and not taxed in the hands of shareholders. However companies must pay dividend distribution tax (DDT) on the total amount. It might be useful to look at high dividend “yield” companies, where you might get a higher dividend as a percentage of price, especially if companies commit to a regular dividend payout.