How much does yesterday’s sudden late night liquidity squeeze impact the markets? Let’s take a look at overnight repo borrowing from the RBI, and the 1% of NDTL that is now the upper limit. Note: There was no upper limit earlier. From now on, any borrowing above the 1% limit will be at the 10.25% MSF rate which is 3% higher than the repo rate. You might notice that last year, in July and August, Repo borrowing was soft, and picked up only in September. July and August are usually low-repo periods, looking at the longer term graph of repo and NDTL. 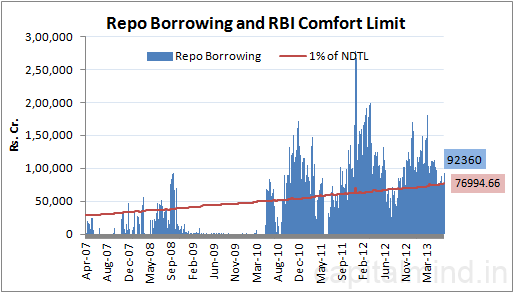 Repo picks up significantly post September, in general. This starts because of the tax due date in September when people withdraw money from banks to pay advance taxes, and continues through the Diwali season (Oct-Nov). This time, that extension will pay a higher penalty in terms of interest rates.

What are the options? Banks can borrow from the interbank market. However that is neither here nor there when all banks need money. Or, they can cut lending or increase lending rates, and that is more likely. However, “evergreening” NPAs will become more difficult now, with a liquidity squeeze in progress.