3 years ago, the Oberoi family that owned the fancy Oberoi Hotels sold 14% of the company to Mukesh Ambani’s Reliance Industries. The reason: to avoid having to sell out to ITC, who owned 14.9% of the company, just shy of the 15% that triggered an open offer requirement (at that time).

Since then, SEBI has set the open offer limit at 25%, and Reliance bought another 4% from Analjit Singh. The total purchase price was around 1,400 cr. at that time, going by RIL’s Annual Report.

These shares, put together have lost over 60% of their value. In a list I tabulated from the Reliance Industries Anual Report, it seems like some of the listed equity investments by the company have done, well, not so nicely. EIH has fallen from Reliance’s first purchase of Rs. 180 per share to Rs. 52.5 per share now. 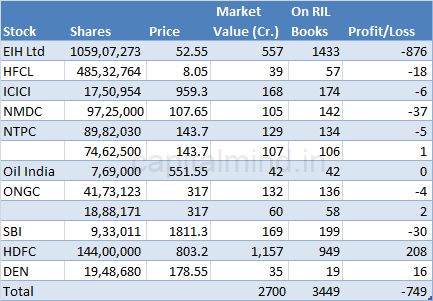 Note: NTPC and ONGC are listed in multiple rows; some are classified as “non-current” investments and others as current investments.

The company has a 750 cr. loss overall. The only two stocks in which gains were:

All the rest are loss-making positions, as of now.

And in the case of EIH, it’s not only Reliance. Eventually ITC will show losses on this account. We’re just happy to not see the evil losers of GTL and Gitanjali Gems in that portfolio.