While broad markets fell 3% today, the biggest intra-day move in more than a year, it seems the Volatility Index (VIX) based on option premiums wasn’t hitting any peaks. 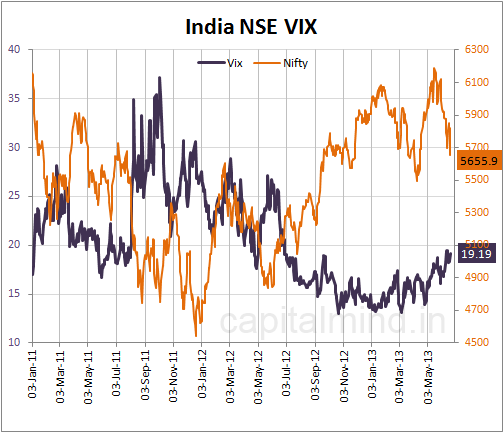 What this means is: the VIX is not really an indicator of volatility anymore. Options have become a massive part of the market nowadays, especially on the Nifty. This can substantially skew calculations. For instance, the market puts the 5700 put on the Nifty at just Rs. 92.65, when the Nifty’s at 5655 (and the future is even lower, at 5640). Effectively that option is in the money if the Nifty falls 40 points in one week (expiry is next Thursday) and the Nifty just fell 150 points in a single day!

When options are so mispriced it is very useful to buy them. I have a December 2013 5500 put that I bought at Rs. 120, and which is now at Rs. 185, and even that sounds cheap! (a 6% further downmove would take it to in the money – and even less to make the option more valuable, which is what you really want)

However less useful the VIX as a number is, the trend of its move and a comparison to its own historical past tells you if people expect the market to be volatile. We’re coloured by recent experiences of “bouncebacks” and directionless-ness, which might explain the lack of panic. If it comes when we least expect it, we’re least expecting it now.

Destiny will meet us on the road we take to avoid it.