The Rupee has hit close to Rs. 59 to a US Dollar, with the RBI rate at 58.92 and looking worse. In the last two days the dollar has appreciated by over 3.5%. This seems to be because FIIs have pulled out of the debt market. But it is a silly conclusion to think that because FIIs are exiting debt and are short term in nature, we should ban them or control them somehow. We should infact have encouraged more of them – so that when some of them are sellers, some others would be in to buy. Read: Let Foreigners Buy Our Debt.

The article mentions the power of using non-deliverable forwards (NDFs) in Singapore and other places to offset the risk of buying rupee bonds, and then exiting the market with a small profit on the NDF which has moved from a discount to a premium. Now for someone with a trading background, this is not really a problem – the risk was taken in Indian rupees, and they hedged out the exposure abroad because RBI has strict rules about who can hedge risk in India and how much. The problem is not the NDF market!

In one way think of it this way – 10 year bond is quoting lesser than the overnight repo rate. This make no sense whatsoever and to anyone holding longer term bonds, it makes sense to book profits on those bonds. The spreads between less than one year government securities (T-Bills) and 10-15 year bonds is really narrow now compared to earlier. The rate cut regime has started but some corporate debt looks structurally unsound and recoveries are taking YEARS! You would expect some debt to flow out.

And if people tell you that this recent fall is only about the dollar the answer is: No. The UK Pound and the Euro have appreciated in similar fashion against the rupee. 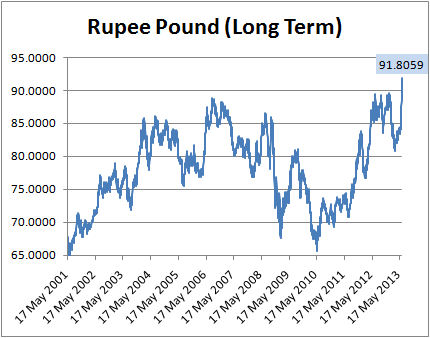 It’s only the Yen madness (Abenomics) that caused the Yen to fall since end-2012, but even that has been reversed in the last two weeks: 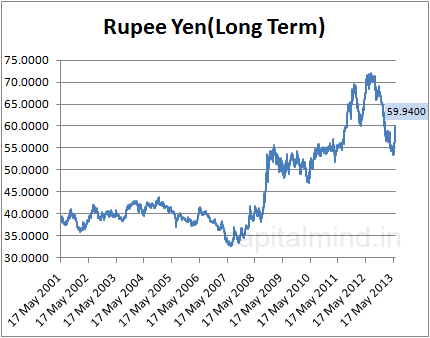 We’ll look at those companies in another post. However what’s important is that the stock market has broken down substantially, and the Nifty is now below 5800, and midcaps have been destroyed  again. With inflation coming in later this week, and the export numbers tomorrow, we’re in for a torrid time on the rupee.

Update: The RBI has intervened to bring the exchange rate down to Rs. 58.52, says Reuters.