In its latest bulletin RBI has released statistics of how it has traded the dollar – it buys and sells regularly when there is a need to “control” the rate, or more likely whenever it feels the need to.

In the month of April (latest data available), the RBI has traded directly for a net purchase of $518 million. This is no great shakes, because the USD INR market trades much more than that every day.

But in addition, they have reduced their forward sale exposure, effectively purchasing $2.7 billion. In 2011 end, when the dollar rose hugely, the RBI sold dollars both in the spot and forward markets, at one point having over $14 billion of forward sale exposure. Eventually these forwards will mature and the RBI will have to close out the contract or create another forward exposure. 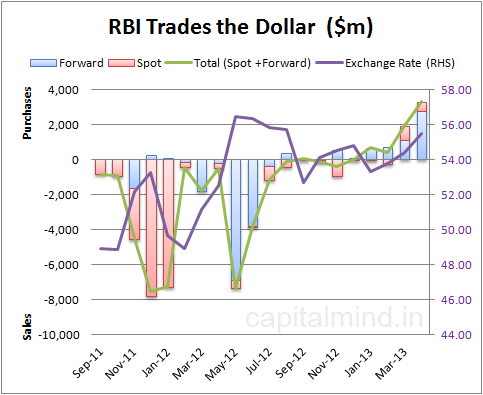 Usually, when the rupee slides, the RBI will sell dollars to help stem the slide. When the dollar rose from the 48 levels to 53 levels in late 2011, the RBI stepped in and sold massive quantities in the forward market, more than $7 bn a month. This stemmed the rupee fall – which recovered to the Rs. 49 level by february 2012.

Between March and May 2012, the rupee went back to Rs. 56, prompting a massive rescue by the RBI in May. (I wrote at the time about freeing up the rupee) That helped, along with the return of Chidambaram to the Finance Ministers post in July, the rupee down to 53 levels.

Strangely, in the months of March and April, the dollar rose (and the rupee fell) from Rs. 53 to Rs. 55 – a 5% fall. However, in both months we saw a net purchase by the RBI, not a sale. This is very strange; they usually tend to trade in the opposite direction to the dollar move. It will be telling to see what they have done in May and June.

The RBI selling dollars means taking rupees out of circulation – since the rupees paid by the buyers of the dollars go to the RBI, those rupees aren’t available in the system anymore. To the technically minded: When RBI buys dollars, it prints rupees, and that expands the balance sheet by adding to assets (forex reserves) and adding to liabilities (rupees outstanding). (This increases rupee money supply) When it sells dollars, RBI takes out some of its assets (forex reserves) and takes out some of its liabilities (rupees outstanding), thus shrinking the balance sheet and the money supply.

Right now, a heavy intervention would need something like $5 to $10 billion per month from the RBI. That will reduce money supply by over Rs. 50,000 cr. – or, effectively, 0.75% of the money supply (which is fairly big in bankign terms). This wouldn’t be bad, but the RBI doesn’t have the stomach for it.

An excellent read in this is Devangshu Datta’s “Gains from Falling Rupee”:

The perfect storm would arise if everything went wrong. Let’s say the trade balance ballooned with crude rising in price again, and ditto, gold. At the same time, exports stagnated. The FIIs sold heavily instead of buying. FDI inflows fell even further. Even then, reserves are sufficient to rise things out. In the worst case scenarios, India would still be left with $125-150 billion plus of currency reserves as well as its bullion.

But in that case, there could be a panic and a run on the rupee. As far as forex traders are concerned, signs of a liquidity crisis could tempt them into taking the hammer to the rupee. At what stage would traders start getting nervous? It could be if reserves fell below $250 billion, or below $225 billion, or below $200 billion. Nobody knows, including forex traders, what the tipping point for a panic situation would be.

Already much of this is panning out – exports have stagnated, imports are rising, FDI and FII inflows have slowed. Will there be panic?