Petrol Prices were increased by Rs. 2 on Saturday, and they are still way below the peak rates seen last year. 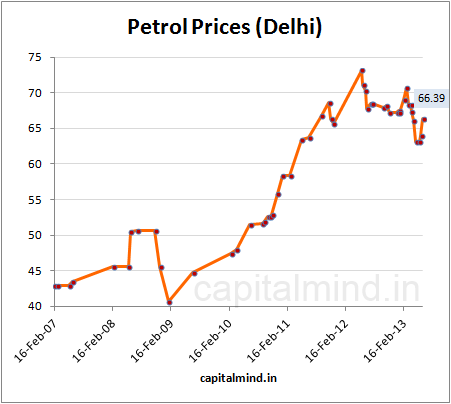 Petrol prices are up 65% since 2007, but much has happened since then. Petrol prices went up in 2008-09 in response to the increase in global prices (then $140 a barrel of crude) but not enough, due to government intervention in petrol pricing.

The government has allowed oil companies to increase the price of petrol every two weeks. Petrol is no longer subsidised, though the petrol companies fool us with a “price breakup” that has no relation to reality.

In context, the recent increase in petrol prices is still within the overall downtrend, and I will maintain that until Delhi prices hit Rs. 71 (a “higher high”).