India’s current account deficit (CAD) was just 3.6% of GDP In the Jan-Mar quarter of 2013, said the RBI. The exact deficit was $18.1 billion, which is down from about $21 billion in the same quarter of the earlier year. 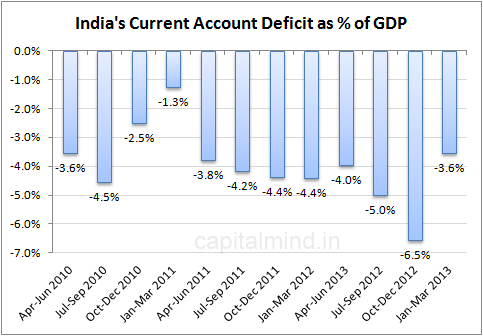 $18 billion is not a small amount for a quarter – it translates to about 98,000 crores. Looking at the CAD purely in dollars with the exchange gives you an idea of how things have moved. Much of our CAD in dollars has increased since the dollar has appreciated. Even then we have a quarter of innocence, much like Jan-Mar 2011.

1) Physical Goods: We imported a net $45.6 billion worth of goods. Of this, net oil imports (called Petroleum, Oil and Lubricants, or POL) were $29 billion and Gold was 14 billion.

2) Services: We exported $17 billion worth of services, mostly the IT industry. That means Goods and Services trade gives us a net (negative) $28.6 billion.

3) Remittances Etc.:  We got $15 billion from our workers abroad. But we invested a good deal abroad, about $5 billion, so that gives us net inflow of $10 billion.

4) So what’s left is the current account deficit  of $18 billion.

This was financed by net portfolio inflows (FII flows) of about $15 billion, and trade credit of about $4 billion, for the most part.

The current account deficit fall as a percentage of GDP is largely because our GDP has grown like crazy. The average growth rate of the GDP (in nominal terms) has been 15%! But that, as we see it, is slowing: 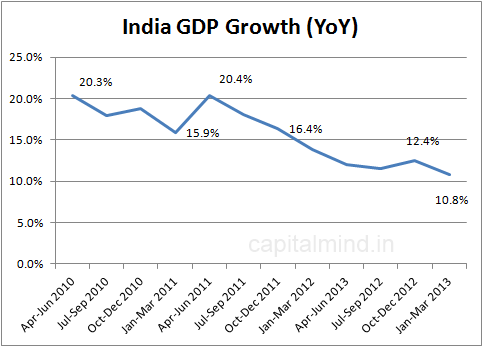 Now to see how this evolves. For the Apr-Jun 2013 quarter I believe the impact of Gold will be huge. We will import lesser due to the slowing economy, and we might export more since the Rupee is nearly at 60 to a dollar.

While the CAD information is interesting, there’s nothing really great about it considering that the rupee has devalued more than 10% since then, and in spite of a 20% devaluation in the past, we didn’t see a massive export surge or a reduction in imports. I believe the CAD, even as a percentage of GDP, will worsen next time.