MoneyLife claims that someone knew Narayana Murthy is coming back to Infosys and traded on it.

Yesterday, when the Sensex was down 455 points, Infosys an index stock was up 3.32% while TCS and HCL Technologies were flat. On Saturday, Infosys announced that NR Narayana Murthy would come back as the executive chairman. A case of insider trading? We will never know because Infosys is a holy cow and there will be no probe

The last line is probably incorrect. An analysis of insider trading isn’t an indictment of the company – it is an analysis into trading and individual greed. One of the problems with insider trading laws in India is that they aren’t wide enough to cover all the mechanisms possible, and that they are not effective enough to deter people through big fines or putting people in jail.

Moneylife’s line of argument is that the Infy stock rose 3.32% on Friday, when the index fell 2.25%. And that there was no “reason” for the stock to move up, given that other IT stocks were flat to down. The second part of the argument isn’t convincing as the relative move in IT stocks is generally not in line. However the first does leave room for question.

The stock move is not hugely surprising by itself. It’s been beaten down post results and much about the buying could just have been accumulation: 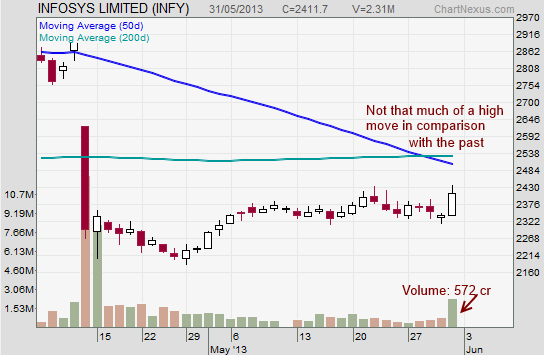 Even volume wise about 2.3 million shares changed hands, which is quite a bit above the 20 day average.

But the futures contracts showed no major increase in volume correspondingly. We saw volumes of about 2 million shares (which is about 480 crores, and not extraordinary, since 1.5 million shares were traded in the futures market just two days back)

In the options space you saw some minor changes that are consistent with the day after the expiry (thursday was options and futures expiry day for may, so you expect a little building in the May futures) 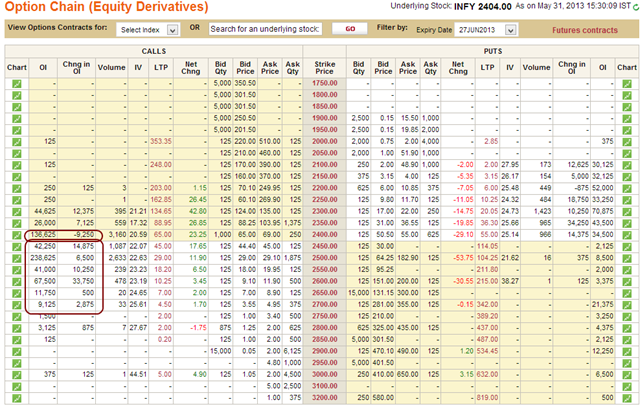 While options volumes show only a reasonable increase in the 2600 call (that’s still 10% up), it does not amount to much – if Infy were to benefit from the news and gain 15%, the total increase in interest, of 33,000 shares, would gain only about Rs. 60 lakh which is peanuts and not worth of an insider trade scandal. Also from the options it is evident that puts are equally if not more heavily subscribed to.

Futures and options are better indicators of insider trading because they offer leverage. You can buy a huge position without needing all the cash upfront. A person with inside info is more likely to use this route. Also, SEBI’s laws on futures and options exposure for insiders is fuzzy, so they might be able to get away easily.

In my view insider trading needs some kind of whistleblower to help an investigation. Going after anyone who bought more than, say, 1,000 shares of Infy on friday will be worthless. Technology can help here: you can see outliers like which participant that otherwise wouldnt trade big suddenly bought a big chunk of Infy on Friday. In fact SEBI should be doing this for every stock, and even tracking circular trades regularly.

The biggest problem is: How do you prove someone who bought had news from the inside? “Confessions” don’t work. Circumstantial evidence saying you spoke to Mr. Murthy or you are related to them doesn’t work (I know it reeks of complicity but it will not fly in a court!) An investigation of any sort needs to focus on proof beyond reasonable doubt. If you need to nail people, you need nail-able evidence, and the method to collect them. SEBI is weak on both ability of enforcement and the legal powers to investigate.

Will Infosys actually benefit from the news? I personally don’t think so. NRN is a great face, and he’s done well in the past. But he’s unlikely to be able to stop Infy’s descent, which stems from heavy competition, slowing exports, and a company that has little motivation to be at the top. The stock needs an overhaul, not a return to the old times. Let the market decide, 9:15 am on Monday.