New premiums in Life Insurance companies are down about 6% in 2012-13, and that follows a tough year earlier. (From the RBI Financial Stability Report) 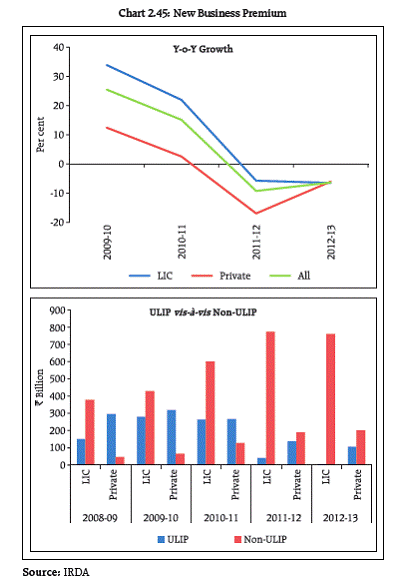 ULIPs are nearly dead. LIC sold next to nothing last year, and the private sector saw a fall in premiums to less than half what it was in 2010-11.

Non-ULIP premiums have been huge for LIC, but you can see that they’re stagnating in growth.

And then, single premium policies – where you pay once and get the benefits after X years – is now getting more prevalant, largely because LIC upped the ante. 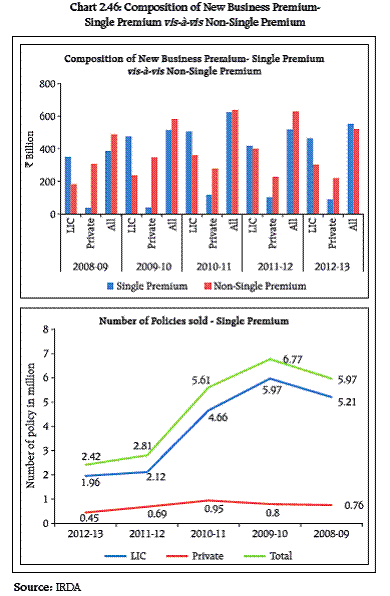 And it seems there has been rampant misselling. I’ve written about how one bank’s representatives try to mask a policy as a fixed deposit (read: Don’t Buy HDFC Crest, It’s not a Fixed Deposit). The RBI has now warned banks:

3.48 While banks are well suited to distribute insurance products because of their wide network, several issues have arisen regarding their conduct in the process, generally pertaining to mis-selling and certain restrictive / unfair practices (such as linking provision of locker facilities to purchase of insurance products, selling of unsuitable and/or multiple policies etc.).

3.49 It was observed that in some cases, banks did not have clear segregation of duties of marketing personnel from other branch functions and bank employees were directly receiving incentives from third parties such as insurance companies, mutual funds and other entities for selling their products. In some cases direct incentives to the bank staff have created distortions in the sales structure.

3.50 According to IRDA’s Annual Report 2011-12 the maximum complaints in life insurance related to mis-selling. They also mainly pertained to the private sector, though LIC leads the business with over 70 per cent share. The type of complaints were mainly in the nature of unfair trade practices and mis-selling of products (e.g. malpractices, actual product sold being different from what was proposed, single premium policy being issued as annual premium policy, surrender value being different from projected, free look refund not paid, misappropriation of premiums etc). As a significant portion of private life insurance companies use banks as their corporate agents, there seems to be an urgent need to revisit the marketing and sales strategies used by the banks in pushing insurance products, especially since insurance is among the more complex of financial products for the common man to fully comprehend. Recently, banks in the UK have also been penalised for mis-selling of payment protection insurance to their lending/ credit card customers.

Oh, and it seems ex-employees of many insurers, now that they’ve been sacked, are also encouraging customers to report mis-selling and demand refunds.

What the industry needs is a massive overhaul. Split LIC into five companies, increase competition and make fines substantially higher, and increase transparency. But it might not happen in my lifetime.