The Government has, in its attempt to control gold imports, increased duty on Gold imports to 8%. All this does is increases the price of Gold in rupees, giving people like me who are long on Gold an even bigger reason to buy gold. Remember, Gold is not a consumption good, it is an investment – and if you want to stop a bubble in it, you do not increase its price.

In April 2013, when there was a Gold “Crash” in the world markets, India promptly doubled Gold imports – in fact, they were up by 138%.

The RBI has been getting in on the act too. They have recently tried to reduce the leverage in Gold imports, by making it possible to import only against 100% payment, versus giving credit on a “consignment” that was the norm earlier. Importers who would use the credit period to sell the gold and then pay off the banks will now have to front-end their payments or pretend to import something else such as diamonds and push through Gold instead. While this move will constrain gold imports, it may also help protect against defaults in the jewellery industry like the 7,000 crore Winsome Diamond default

The Rupee-USD rate is nearly at Rs. 57 today (and has crossed it intraday). 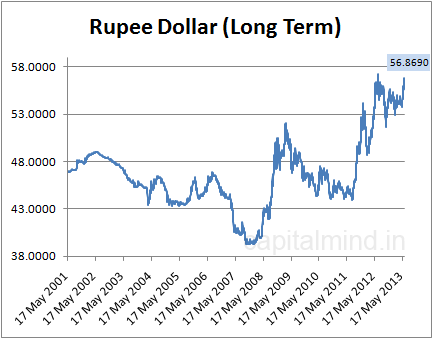 The all time high is 57.21, breaking which would make things very complicated. A rising dollar makes loans in dollars (that many corporates have taken) dearer to return. It increases inflation since it will hurt the price of crude, which is our biggest import. And that of gold.

However, we have to understand that Gold isn’t the problem. India is the world’s biggest importer of gold, and this has been the situation for a very long time.

Will Not Stop Importing Gold

Indians trust gold, they give it to their children in weddings, they think of it as financial security. While some of it is steeped in tradition, the feeling of gold-as-secure is also from the fundamental quality of Gold – as something that has limited supply, can be carried around and broken down into smaller quantities (great for use as a currency, versus say real estate), and won’t depreciate over time. And then, it’s one of those things that people love to have as jewellery and flaunt it.

Then why isn’t gold popular in the rest of the world similarly? India has seen way too much inflation, and distrusts the banking system. The inflation is because of many factors, but the biggest one in my opinion is that the RBI prints too much money. We have printed money to the extent of 15% per year, since 1997.

When you see paper currency devaluing itself so much, and visibly so with inflation, you will surely cut your dependence on it.

Attempting to curb this demand which is “structural” through duty hikes or leverage cuts is not going to help.

1) Fix the money supply growth problem. Bring inflation down to zero or negative and shore up the rupee by selling dollars (we shouldn’t have this many dollars on the RBI balance sheet). Soak up liquidity. This will cause a recession. And that’s okay because where we’re going today, we will see a huge depression instead.

2) Help India become competitive. This means you have to “give” resources to the private sector for free or cheap. Like 3G airwaves. Like radio spectrum. Like making export procedural hassles next to zero, including at ports. Like fixing our roads and ports, making most airports private. To raise funds to do so, we should sell all public holding in banks, infra companies like BHEL and ONGC, even at low prices.

(Do not do stupid things like make exports tax free. If you want to reduce taxes reduce it on all companies, not just exports.)

3) Increase the financial strength of the rupee. Let foreigners buy our debt. And equity. Let there be free trade of the rupee. Attempt to buy oil in rupees and persuade oil rich nations in the gulf to keep rupees on their balance sheet.

This is a 10 year solution, but we have elections next year, so none of this will happen, unfortunately. In the interim, I would bet on gold to strengthen (in rupees) and the rupee to weaken. We could quite as easily go to 60.