In an excellent paper titled Buffet Stocking Policy in the wake of the National Food Security Bill, Ashok Gulati and Surbhi Jain from the Commission for Agricultural Costs and Prices (Agri Ministry) state, with facts, that we have way too much “buffer” stock sitting in FCI Warehouses, and that even with the Food Security Bill, we will be vastly overstocked. This excess can be exported and could cut 10% of the Current Account Deficit.

But let me not say it. Let them say it, in Graphs. (All charts and figures have been used from the original paper)

Procurement has doubled since 2006 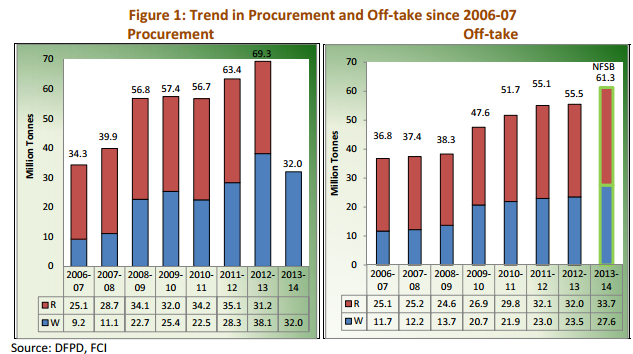 The government has procured nearly 70 million tonnes of Rice + Wheat last year, up from about 35 mt in 2006-07. Export of wheat and rice was banned between 2007 and 2011, so some procurement was increased so that farmers don’t lose. Note: This is stupid policy. You ban exports and then acquire more than you can distribute? What a screwed up strategy.

Offtake, meanwhile has seriously lagged it, and there is too much left over. On the right, you see that even with the National Food Security Bill (NFSB), we will still need less than we procured last year. 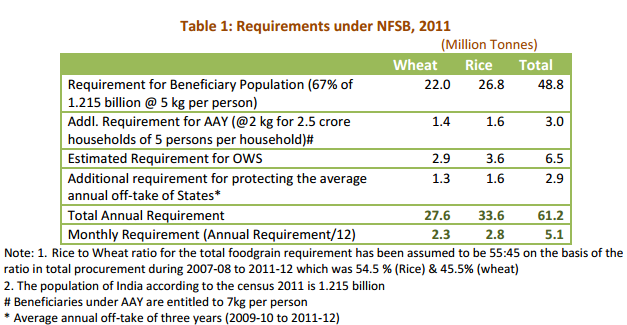 Procurement of Wheat is mostly in three months, but offtake spread over the year

Wheat is procured in three months – April, May and June. Rice is more spread around the year. Both are distributed evenly in the year with very tiny variations. 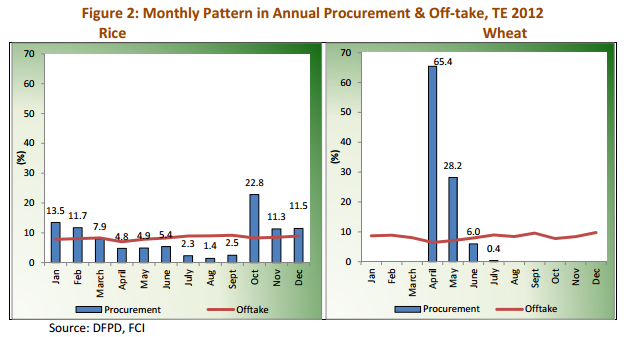 At the extreme, the stocking situation is such that the buffer should meet at least another quarter of offtake. Remember this assumes we don’t even import in an extreme situation.

In the paper are detailed calculations where the authors find out how much stock is required for every quarter, based on how much is procured and how much the offtake is.

At the beginning of every quarter the operational stock in the buffer at any point needs to be, considering one, two or three months as a level:

At a strategic level, the buffer required is a function of how much the average production has deviated from the average in the last few years. 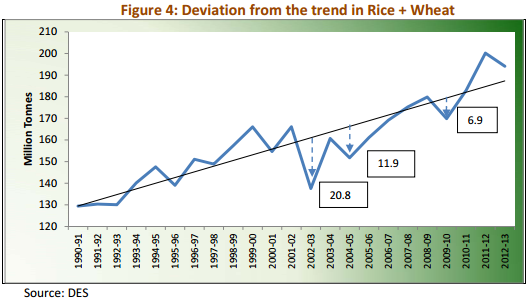 2002 was an anomaly that has occured once in the last 20 years,and the authors decide to ignore it and focus on the 95% statistical deviation level. While the above graph is about production, the procurement by the government is different – in the down years, the government will procure more. The maximum deviation at procurement of only 8 million tons (not counting the 2002-03 event) A strategic reserve would thus need only 10 million tons of rice and wheat.

(I’m not sure about this since we might need strategic reserves only during an extreme situation. But we can readjust later)

Total requirements, including for the NFSB:

We are WAY overstocked 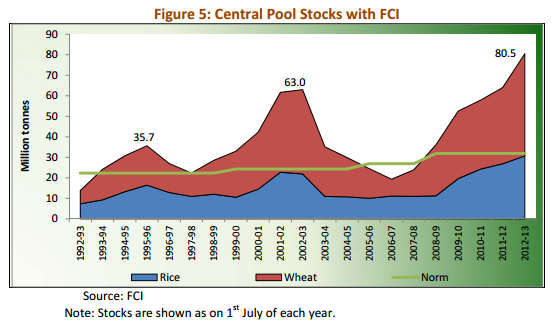 We are likely to be even higher, at 82.5 million tons by July 2013. This is nuts, considering that even at the 3-month-we-won’t-import extreme, we require just 51 million tons!

This is a huge figure. 70,000 crore is equivalent to 1.5% of total bank credit in the country. That’s just the cost of the excess stored grains.

What Can We Do?

I believe these are all very good suggestions.

Swaminathan Aiyar says the cost of 70-90K crore hurts the fiscal deficit too (since it is government expenditure or, put another way, removing it would cut the deficit by that much). An offset would reduce the fiscal deficit by about 20%. Addit
ionally, he says, bank credit to FCI blocks capital credit to small and medium industry.

Exporting will do us good – we will actually be able to sell something the world wants: Food. Even if the impact is 10% of the current account deficit, the impact of getting that many more dollars in will help the rupee in the way it should, rather than by short term stunts like having the RBI sell dollars etc.

Secondly, we should absolutely dismantle the government role in procurement and storage. I’m very much for a cash based PDS where you transfer money to individuals rather than foodgrains. When you let the market work itself out, it will do wonders, even though there may be some bubbles and madnesses. That is far better than the current condition of:

Finally, we need to eliminate restrictions on farmers selling to retail players directly or on exports of food products. That will ensure that competition is sustained.