Fortune magazine has a long and detailed story about Ranbaxy and the reason for its $500 million settlement with the FDA.

But in Gurgaon, as Thakur’s project managers gathered data and interviewed company scientists and executives, he says, they stumbled onto Ranbaxy’s open secret: The company manipulated almost every aspect of its manufacturing process to quickly produce impressive-looking data that would bolster its bottom line. "This was not something that was concealed," Thakur says. It was "common knowledge among senior managers of the company, heads of research and development, people responsible for formulation to the clinical people."

Lying to regulators and backdating and forgery were commonplace, he says. The company even forged its own standard operating procedures, which FDA inspectors rely on to assess whether a company is following its own policies. Thakur’s team was told of one instance in which company officials forged and backdated a standard operating procedure related to how patient data are stored, then aged the document in a "steam room" overnight to fool regulators.

The whole thing is damning and it’s surprising (if true) that Ranbaxy top honchos were not investigated for fraud. In fact, given the huge clout that large pharma has in the US (and the fact that they hate generics for taking their revenue away) it is almost certain that there is no complicity of top Ranbaxy management in the case. If there was, there would be a criminal suit by now, guaranteed. So you should consider much of the claims as over the top.

However, regulatory arbitrage is commonplace and nowhere more than in India. We have Flipkart’s trying to build business models by taking foreign funding in a sector where foreign investment is specifically not permitted. We have stringent rules on who can take “deposits” or invest other people’s money, yet there are chit funds and Saharas and all sorts of complicated arrangements. We have insurance companies who willingly obfuscate products to look like safe investments when they are infact stealing money through commissions. Banks that raise interest rates when they want, but will create ludicrous benchmarks like “new PLR” to avoid having to cut rates for existing suckers, while they offer better rates for new customers.

This is not a defense of Ranbaxy. It’s the sorry state of affairs where large entities break rules routinely and do not get caught or indicted or even slapped on the wrist because they are, well, too big.

We’ve seen too-big-to-fail in the US. Perhaps Ranbaxy is, in a way, too big to fail, given the number of jobs it has created, and given the impact to Indian pharma. Yet, it’s our kids that deserve unadulterated drugs, and we can’t put them below some silly notion that jobs should be preserved at any cost. Justice involves punishment; and $500 million may just be the beginning. 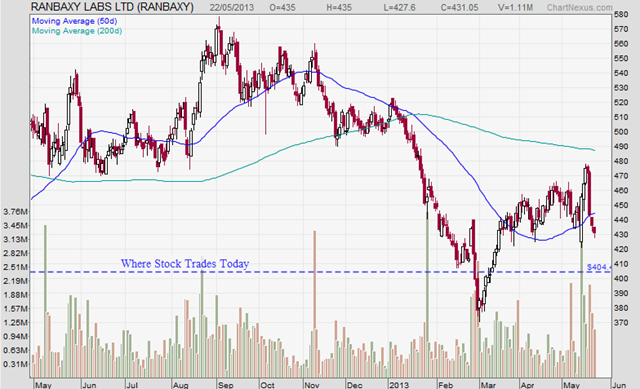 The stock has seen worse, but even that worse is just another 10% away.