If you buy a fixed income bond, your problem is that as inflation increases, your income remains the same and this gives you a much lower return, net of inflation. One way to solve that problem is to have bonds whose payments are linked to inflation.

RBI has allowed inflation indexed bonds (IIBs) in 2013-14, where they believe the Indian retail investor will keep their money because if Inflation should go up, income also goes up.

How do they measure inflation?

RBI will use the monthly-released WPI number. However they won’t use the most recent number – they would have used the number in Sep-Oct 2012 to finalize numbers for Feb-March 2013 and they’ll interpolate to get to the number on a certain date. (That is, for an interest payment date of March 15, they’ll do a day interpolation of the indexes of Feb and March)

The lag is to allow for adjustments due to revisions. I’ve noted recently that WPI is adjusted often and sometimes significantly (a 0.4% change is significant and it was done for Feb WPI numbers when April numbers were released).

How does it work?

[The 7% is just for illustration. The actual coupon is likely to be much lower]

Inflation index bonds expect to change the principal but retain the coupon at the same rate. You will get 7% but on a higher or lower principal depending on how inflation goes.Effectively the amount of interest you receive moves with inflation.

Note: I had this part wrong. What follows is the correct method, thanks to Dheeraj Singh and @anandhsub.

Year 1: Let’s say inflation is 10%. That means the WPI index, which was 200 at start, is now 220. The calculation is that principal goes up by this amount and so does interest.

Effectively the new principal went up. You can’t do anything with this new principal. But like the house you live in, you can feel good that its price went up.

Same calculations give us:

And so on. Here’s a rough table comparing it with a regular bond of 7%: 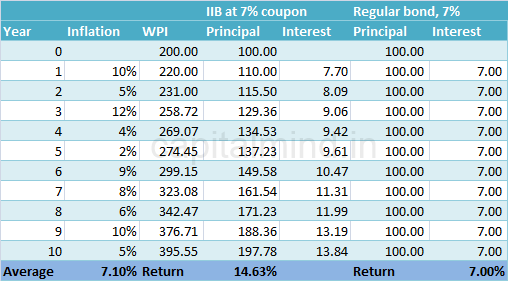 If the bond now matures (note: maturity is 10 years for these bonds, but just saying) Rs. 197.78 will be paid to you as the principal. This becomes a capital gain. However, should the bond principal fall below Rs. 100 because the WPI index hugely deflates at maturity, you will get Rs. 100.

The bonds are issued by the government of India, in Indian rupees. They are as safe as bonds get.

Ref: See how the US Inflation Protected Securities, or TIPS work.

How do I buy and sell?

This part isn’t very clear again. The RBI conducts auctions for regular government securities. In these auctions you can buy bonds of Rs. 10,000 face value, at a price. The coupon rate is mentioned – in the first auction, the coupon rate will be determined from all the bids, and the final rate will be the rate for subsequent issuances.

To buy, you’ll have to have a demat account at least, to transfer those securities to. I believe that to bid in the auction you may need a CSGL account as well, but even the RBI says that it’s better to run a bid through a primary dealer than to try do it yourself, for now.

Even if you got a CSGL account up, you will find it difficult to sell unless you transfer your holding to a demat account. This process can take days.

To sell, you have to hope that these IIBs list either on the NSE debt segment or elsewhere (these are in the plan). A corporate with a CSGL account could sell on the RBI’s NDS platform, but only by going through a dealer; and here, most trades are in multiples of Rs. 5 crores. (there is an “odd lot” market for smaller numbers but those generally get worse prices)

Bond tenures are 10 years right now. They might introduce a longer one at another time.

Yes, within the same limits as any other government bond.

What price do the bonds come at?

What price would you pay for this bond? The actual yield of this bond should not be considerably higher than a regular bond of the same tenure – typically, the rate of return = Average Inflation + coupon rate. That means a 7% coupon IIB will, at 8% average inflation will give you 15% rate of return. (7% + 8% inflation). This will make sense only if the regular 10 year bond is trading at around 15%. 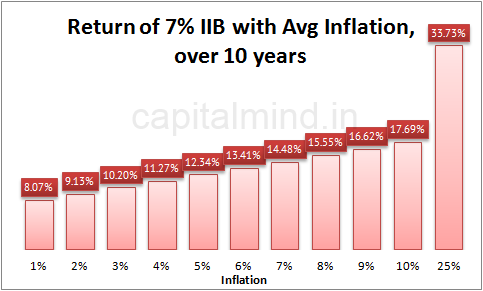 When such bonds trade they will trade on yields that, when added with expected inflation, will give you market level returns for similar  tenure government bonds. This might just be a fantastic deal for a retail investor – an expectation of 5% inflation will give you a product that yields 12%, if you get to invest at Rs. 100.

Pricing is fiendishly tough since there is no easy way to predict inflation. The WPI itself is flawed, and is likely to be changed using a different base year soon, so many index calculations will change.

Right now we don’t know the coupon rate (5%? 7%?) of such a security since that will also be determined by weighted bid method in the first auction. Effectively the coupon of this security is the “real” interest rate – the amount greater than inflation – that you earn. In India we have always been working with negative real rates – that is, we are happy to have lower yields on our investments than the inflation we face. To that extent, a coupon rate of even 1% should be very desirable.

Also see: Inflation Indexed Bonds, a paper by the RBI.

I don’t currently know an easy online method to invest. Most likely investing will require serious paperwork. If any of you know how easy it is to get to bid in the auctions, please let me know.

Interest received is taxable so you will get actual interest that is less than inflation. Instead, if you want to hold for a long term, you should buy a mutual fund that owns such securities. On that note, I believe Mutual Fund companies should create MFs that exclusively buy and hold such bonds. The interest that MFs receive is not taxable. The gains that you make are taxable only on exit, and if you leave after a year, you can further “index” your returns to inflation as well, giving you a double benefit.

Linking to the WPI is a little zany. India will be the only country that uses a wholesale price index instead of a consumer price index (CPI) for inflation indexed bonds – other countries like the US, UK, Sweden and Hong Kong use consumer prices. After all that’s what you want to protect against – retail inflation.

In April 2013, the WPI shows just 4.89% inflation, while the CPI shows 9.39%. The gap is so wide that there is no chance any retail investor will want to buy indexed bonds based on the WPI.

CPI also contains elements the WPI does not, such as housing costs, services and others. In addition, the CPI revisions have been minor, and therefore is a more reliable number.

At this point we don’t know if interest is paid once a year, or twice that is the case with other government bonds. (Answer: Twice) There might be a trading case based on whether you think inflation will go up on down, though in most other government bonds rising inflation is bad for the price (they think yields will go up, and yields are inversely proportional to price); in IIBs, the price should go up or remain the same since the principal will be adjusted to reflect the change.

Certain things that will make the bonds attractive:

Let’s see how it works out on June 4.