In the post-policy press conference, Dr. Subbarao, Big Boss of the RBI, made this innocuous statement:

Dr. D. Subbarao: No there is no bubble. Housing price index is showing an increase and we have reported that in our document that came out on Thursday. The monetary and macroeconomic development document which shows the housing price index, I think in 9 cities of the country and there is no bubble building up there. Okay, thank you let us move on.

I don’t know how you define the word “Bubble” but you have to see the following statistics in their own report. The India-wide House Price Index (HPI) – which uses registration data from local state governments to determine price rises, starting from March 2009, quarterly – is depicted below. 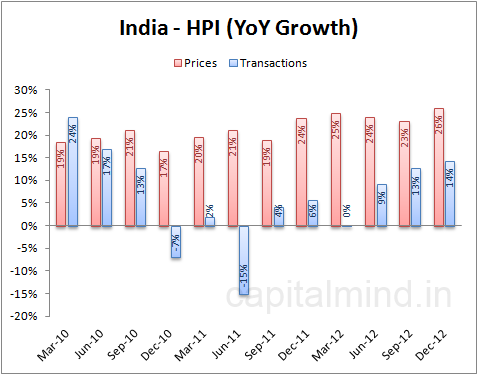 This shows you how prices have been going up. At a CAGR of 26% since March 2009, prices are growing way too fast.

Remember, the RBI had been worried about house price inflation as far as March 2011, when average growth was way below the current number.

There are really six stages of a real estate cycle:

But each city is on its own trip, and let’s look at cities individually, with what little data is actually released.

There is no stopping Mumbai. With prices growing at 30% and positive price action all the way back, and transaction growth steady at 27%, it looks like the bubble’s just heating up. But note that because of a massive 44% drop in 2011 in transactions, the recovery has still not been complete – in fact, the transaction index is still at 96.3 when it was 100 in March 2009, meaning that there were lesser transactions now than in March 2009, and prices are up about 2.5x since. This may still be the consolidation phase.

Delhi seems to be in trouble. With prices up 47% from a year back and 250% from March 2009, you would expect heated activity. But transaction volumes are falling and falling fast at –35% last quarter. From anecdotal data, it seems like transactions have shifted into the pre-registration stage – where you pay the builder to build a house, but you don’t actually register the property as it’s not ready yet. Still, the –35% is a cause for worry, and it’s at the end of what seems to be the consolidation.

Bangalore is in the initial down-phase. Transaction volumes have been coming down substantially even as prices have been increasing from Dec-11 to Sep-12. Now, price increases are down to 1%, while transaction volumes have picked up. This has happened earlier – in 2010. The economic recovery since then has ensured prices picked up too. But then, we were still growing at 8%+. Now, we’re at 4.5% and slowing – will prices go hugely negative? Bangalore remains in Early Fall.

Chennai seems to be in the Delhi-stage – prices are up 24%, but transaction volumes down nearly 40%. Again, this is a huge problem area for people lending to real estate – especially to speculators. Early Fall stage.

But these seem to be mellow – both Bangalore and Chennai have relatively low compounded annualized growth since 2009 – just 11%.

Kolkata and Lucknow seem to again be in the Early Fall stage, of rising prices and falling transaction numbers. Kolkata, like Delhi, is further down in the cycle with three consecutive quarters of such moves (increases in price, lower number of transactions). These remain in the consolidation phase, with Kolkata likely to crumble earlier.

Jaipur seems to be doing okay – prices are up only 10% and transactions are up 60% over the previous year. It’s still building up.

Ahmedabad might be in the early fall stage, with prices having gone up nearly 40% last year, but that’s come down to 9% in the December quarter. Expectedly transactions were down last year, and are up relatively now. 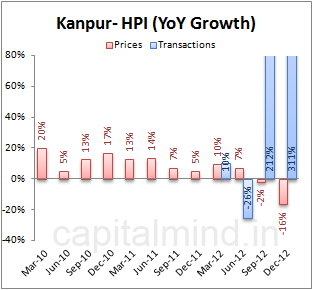 Kanpur seems like it’s going through Despair. Prices are down 16% while transactions are up.

While India as a composite country is not at a bubble stage right now, it’s important to note that various bubbles are building up in individual cities. If any of these bubbles worsens, then it is likely that other cities will follow. There are no un-correlated prices in a crisis.

I think the RBI governor doesn’t think there is a bubble overall. But looking at the data closely, these bubbles need to be monitored. Specifically, banks and RE companies might want to reduce their exposure to bubbly areas.

Non-durable and high-end Retailers would do well to avoid expansion into areas where prices are falling. When home prices fall, it generally causes people to cut out discretionary spending initially, even though it is irrational.

Lastly, as investors, it’s important to note where prices might be falling, and the pace at which they fall. Avenues for participation, both on the downside and the upside, might become evident. Bubbles are normal part of price cycles, in real estate they take longer to get visible, that’s all.