The Infosys Stock is down over 20% today as results came in. As I mentioned (Chart of Infy on result days) the stock was expected to be volatile – and I ended up closing a good profit on some put options I held.

The results aren’t quite so bad, but expectations were too high. After all, with the dollar at 54, one doesn’t expect a software exporter to be doing badly. Let’s take a look, in some charts.

Revenues are flat (QoQ) and Profits have been flat 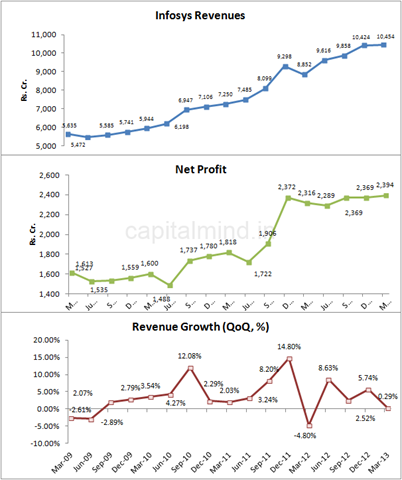 Note that profits, at about 2,400 crores, are nearly at the same level as the March 2012 quarter (3% up) but more importantly that profits have more or less flattened out. Revenue growth in the last quarter of the year has been very little, despite a global market recovery (in the stock market, at least).

P/E to Growth now Greater Than 1 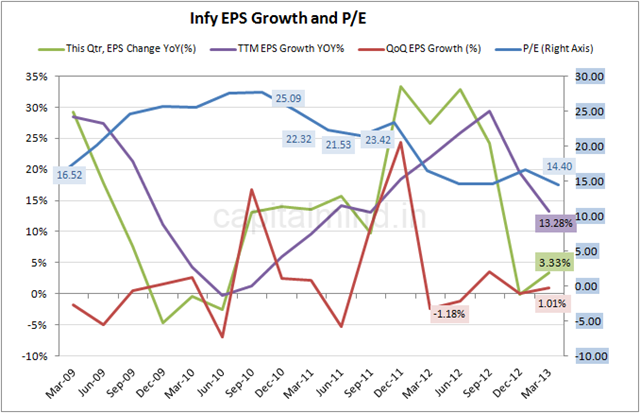 Even as the stock goes down, the P/E remains high at 14+ (Trailing 12 month). The 12 month EPS growth is down to 13.3% which after four quarters is actually lower than the P/E.

For a company that needs to hire more to make more money, employee growth has been very low. Inspite of hiring nearly 9,000 people in the quarter, attrition is so high that only 1,059 people were added this quarter – the difference is attrition. 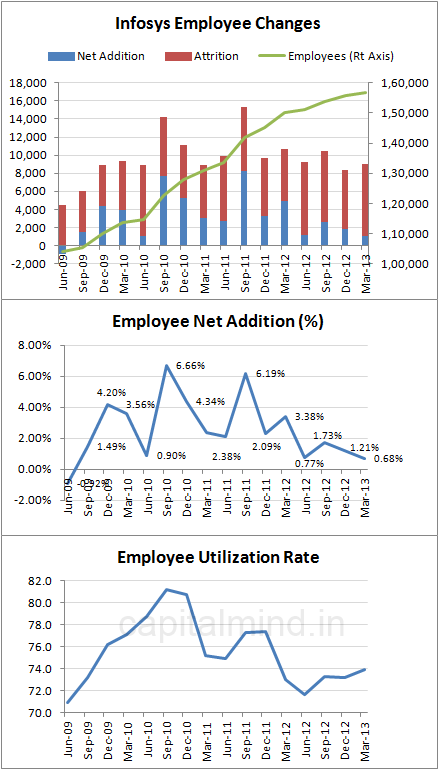 This is the lowest net-addition number since Jun 2010.

North America’s share of business has been steadily declining, which might have impacted the lower numbers – the US seems to be recovering versus Europe, and the mix has gone in favour of Europe by 5% in the last three years. 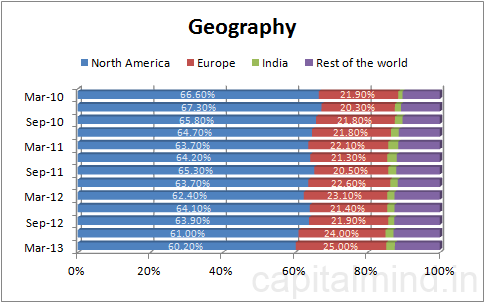 Future guidance is also for a weak 6-10% growth in revenue. Considering they’ve not raised salaries for a while, they might have to this coming year, so it is likely margins are hit some more. In general, not a very exciting quarter, but honestly, with Infosys, that’s not something new.

Disclosure: I have no further positions.