SEBI has ordered the Saraf family of Zenith Infotech to produce bank guarantees of $33 million without using any funds of the company. SEBI has found evidence that could show that the promoters have siphoned off money from the company, to the detriment of bond holders.

2006-07: The FCCBs were issued in 2006 to convert at Rs. 310 per share, and in 2007, another $50 million was issued to convert at Rs. 522 per share, due to mature in August 2012. FCCBs are debt and can be converted to shares at the conversion price on maturity; failing conversion, the money has to be returned at the “coupon” rate of interest.

2011: Zenith defaults on payment of $33 million FCCBs. Admits it in October, and says it’s trying to settle. This, despite noting in the Sep results that it had 187 crores in cash and bank balances, which would have been adequate to cover the FCCBs. The stock market didn’t like it – the stock fell nearly 50%. 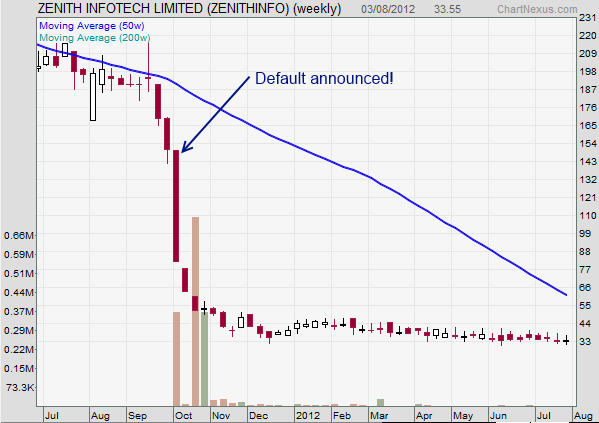 Automatically, due to a clause of no-default, even the later $50 million FCCBs became due, and went into default too.

Alongside, Zenith said they’d sold their managed services division (MSD). Bondholders were refused details when they asked about how much they sold it for. Eventually, the Bombay High Court made them reveal it: they had sold it for $54 million to Summit Partners, a PE player.

But it turned out things were more sinister. Just before the MSD sale, Zenith transferred it to a holding company in Mumbai in which the Sarafs (promoters of Zenith) owned 60%. That company was then sold. The money received was shared between Zenith Info (the Indian, listed company) and Zenith Dubai (a fully owned subsidiary).

Now the drama begins. Zenith India and Zenith Dubai together transferred $10.4 million to a singapore based subsidiary, and another $13 million to Vu Dubai and Cloud Dubai, both promoter owned entities, which are now subsidiaries.

SEBI has recognized this as behaviour that is designed to potentially defraud bondholders, and to default on FCCB obligations.

The Sarafs have been told to not buy or sell securities till further notice, and to produce a bank guarantee of $33.93 million, to cover the liability.

The implication: This kind of case doesn’t do very well for our system, if it isn’t decided swiftly in favour of bondholders. The Courts, and SEBI, have moved way too slowly. With over a year and a half in default, bondholders must have given up most or all hopes of getting back anything. If promoters have siphoned out money, it should be forcibly brought back immediately (supposedly all the money lies with subsidiaries) and the company sent into liquidation. I have zero hope of this actually happening; what is more likely is long, delayed litigation. The message to other foreign investors (or even Indian investors) is:

If they defraud you, you can do nothing but wait, and wait for a very long time.

It’s a wonder why we don’t have our NASSCOMs and business players scream blue murder about such blatant wilful defaults by Zenith. Oh, but like Sanjay Dutt, they’ll probably ask for pardon instead.