As we now know, the ECB and other mad European countries have been urging Cyprus to accept the bailout plan that requires all bank deposits to take a 9.9% “cut” (6.75% for less than 100,000 euro deposits).

Now consider this. Cyprus has a depositor’s insurance – that is supposed to protect all deposits below 100,000 euros. India has one too, capped at 100,000 rupees. This insurance is toilet paper, because the under-100k deposits lose 6.75% as well. What’s the big deal? Deposit insurance is there precisely to make people feel secure about their bank deposits and not withdraw in a hurry.

First, Why Are Deposit-Withdrawals Scary?

Remember, banks make deposits fungible (give you an early exit) but don’t have the ability to draw money back from loans easily (they can’t tell you to pay now even if you have time left). The ability to service deposit withdrawals is usually limited to a small amount – banks assume that if you take out money, someone will put in money and net-net, if there is a small amount needed, they can borrow overnight from a central bank until things even out (or raise deposit rates if the issue is more structural).

Bonds, on the other hand, aren’t redeemable before maturity (usually). That means if a bank issues a 10 year bond, they don’t have to worry that someone will want to exit earlier – the only way to exit is to sell to someone else in the market.

That’s why a “run” on deposits is scary. If people can exit deposits, banks will end up having a massive liquidity problem, with no way to give back money unless they can borrow from a central bank. The other reason they may not be able to return money is when their loans turn bad, and therefore they have lost so much money they can’t return depositors money completely. The first is a liquidity problem, and the second is a solvency problem.

You can get a liquidity problem even from fears that there is a solvency problem. If people realize a bank isn’t able to pay back all its deposits, they rush to get their money out first, and it all comes crashing down.

What Happened In Cyprus?

The problem with this approach is – only 39% of deposits in Cyprus are foreign owned. (see their banking data) This chart may be skewed in that some of these deposits are held abroad in foreign branches of the banks (no tax on those deposits) There might be more that are held by companies who are residents of Cyprus, but whose shareholders are foreign. A number of Indian FII and FDI investments originate from such companies.

So at one level you’re largely (60%) punishing residents of Cyprus, in the effort to make “the russians pay”. This is exactly what they mean by throwing the baby out with the bathwater.

The renege of the bank deposit insurance is a broken promise that will cost dearly. First, when banks open on tuesday, it’s quite likely that there is an immediate bank run on all deposits within Cyprus. Why, when people have already paid the tax? Look, no one’s this stupid to assume this is the end. Greece required a second bailout. What’s to say Cyprus won’t have to do it again? Even if they make a promise, they’ve broken one with the deposit insurance so why can’t they break another one? No, a broken promise is bad because it destroys the basic tenet of confidence that makes the system work.

We have seen too many broken promises recently. From governments promising to keep to deficit targets and then missing them, to retrospective tax amendments, to even central banks irresponsibly pumping up problem-causing banks. The failure of trust – a theme I started writing at Yahoo on – is one that will haunt our banking system forever.

Beating Up The Risk Chain

Anyone who invests anything in anything expects the following thing about risk, when the investment starts to go underwater or, if the recovery through assets is less than the Liability.

Note carefully, that you, as a depositor, should get hit only after three other categories are wiped out. Thats a sign of security and one of the reasons you invest in a bank deposit.

Deposits were a substantial part of funding for banks (nearly 80%) but it still means you have to follow the risk chain. The Cyprus Bailout changes all that. With depositors taking a hit before bondholders or even shareholders, the risk chain has gone for a complete toss.

The Bank Run in Cyprus will happen regardless. This is also likely in most branches of these banks abroad as well, even where such deposit holders are not impacted right now. Because who’s to say they don’t need another bailout where they’ll sequester funds held in all branches tomorrow, huh? They “assure” you they won’t? Like the deposit insurance “assure”?

By Tuesday (since Monday is a holiday), if the Cyprus banks are history, the government will have to work really hard to build confidence – by either borrowing from the ECB (again) or letting the bankruptcy flow through, getting out of the Euro and using a much weaker cur
rency of their own. This may actually be the best option, compared to nationwide zombiehood that will be imposed if they borrow from the ECB.

The contagion, however, will not be limited to Cyprus, if it happens. The current defence from other countries is that Cyprus is unique with an outsized banking system. But you know, every finger is unique in some way too. Every other deposit holder in Europe is likely to be worried, especially in countries like Spain, Ireland and even Greece. If we see withdrawals, the game is going to move into the endzone very fast – most European banks are levered so much that even a small run can cause serious damage.

The endzone, to me, is actually desirable compared to just kicking the can down the road again. It will affect everyone, even India, no matter how much they tell you we’re different. Cyprus isn’t a problem of size – it’s a tiny country. It’s a symptom of the real problem – by “bailing out” bad banks when they were small, we’ve created a monster of a system that can get impacted even at the tiniest peripheral jitter; and the more we continue the bailing out, the bigger this unstable monster gets. For the sake of my children, I would rather have the endzone now. 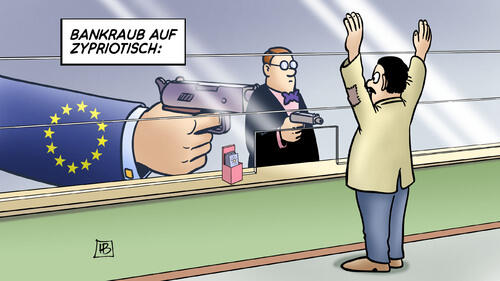 (From Someone On Twitter, sorry I don’t remember who)

"What the market teaches you is humility. That you can take nothing for granted, and that value is a figment of your imagination. Investing decisions, ...