I have recently realized that what you see as a “press release” that sounds like it will make the company a juicy buy, might actually have more to say on the negative side than the positive. Let me cut the theory and get to the real world examples.

Suzlon’s Selling Of Key Units In The Future

Suzlon, on February 7, 2013: News comes in after a sharp rise in the stock price, that the company “may sell stake in three divisions to pay off debt”. A banker, supposedly involved in the CDR process with Suzlon, seems to have said that Suzlon needs to get rid of some key units in order to pay back the debt; prompting calls that this would be an awesome thing for the stock. It was not: 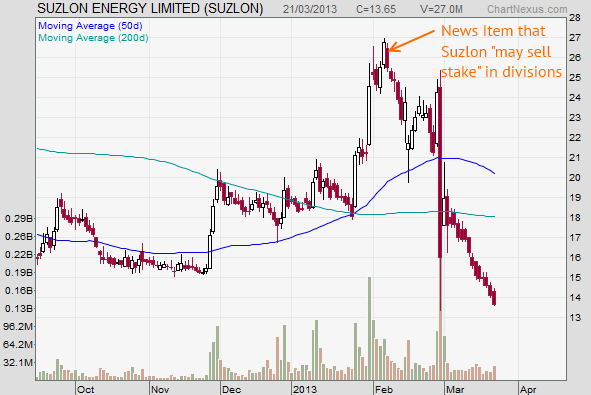 The big candle is the stake sale by promoters (largely to Morgan Stanley) which was on the budget day.

However, the stock has only been making new lows. The rise from the sub-17 levels in November to nearly 27 in Feb – more than 50% in two months – had people wondering.

My problem was that piece of news. Which banker would reveal that a company has committed to sell some key assets? If you are a buyer and you know the seller is desperate to sell because he has a commitment to bankers, will you not squeeze the fellow out dry? Why would a banker jeopardize a deal? Why not sell and THEN reveal that this was part of the commitment?

That would be normal behaviour. When you find abnormal behaviour, you ask questions. With Suzlon, I had told a friend about this and he smartly sold the stock. I, being a sissy, did not go short (there were more complicated reasons but you can attribute sissy-ness).

The correct trade would be to put a stop loss of around 30 and go short. (30 is a nice technical level in the past)

Again, coming after a near-term upmove, there was a news piece on Airtel that said it is in “talks to sell a 25% stake in the DTH arm”. The news was remarkably detailed, like this:

Sources with direct knowledge suggest that the company is expecting a valuation of $1 bn. Bharti Airtel has already signed a non-disclosure agreement (NDA) with at least seven strategic and private equity players for the stake sale, sources confirmed.

U.S. based DTH players like Comcast and Liberty Global are said to be in talks with Bharti Airtel for buying stake in the DTH arm. Some of the private equity players like KKR, Providence, Bain Capital, GAAP are also said to be in the fray. Bharti is looking at raising over $200 mn via stake sale.

This I can’t digest. Airtel wants to sell stake, that’s okay. But to reveal that it’s already signed an NDA, with named players, with already a number out there about how much it’s looking for…who does this? Deals happen behind closed doors, numbers are discussed face to face, in the back seat of a car or over a phone conversation. No one gives you information in such detail BEFORE the deal has been done.

And then, the Airtel stock was showing a sign of technical weakness. A H&S formation, with a key moving average just proving to be strong resistance. 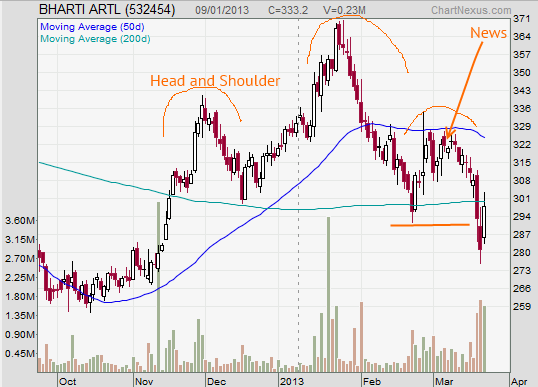 Note: In both the above stories there was no management involvement. People make money on stocks and they have incentives to rig up prices, even if they are not management, and this includes big brokers and banks. So we don’t know where these rumours came from, but it definitely “marked the fall”.

The Unfinished Demerger of Halonix

Owned by Actis, a PE fund, Halonix has in the past stoked investor appetites by saying it will sell the profitable arm of the company by demerging the less-useful general lighting division to a promoter owned entity. The whole story is here, but my question then was: If you want to demerge, and you have all the permissions, you should demerge – why are you not doing it? The answer, six months later: The selling of anything is not happening.

Recently, the company again reported plans to sell the general lighting business. And yet: 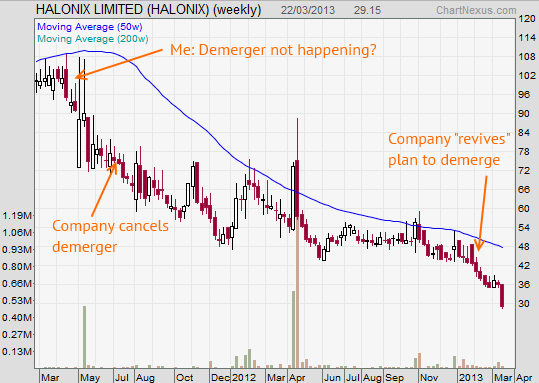 I’m not saying that there is fraud involved by management or otherwise. I’m just saying that when I find news that a company WILL do something, I always wonder why they don’t just do it if they want to, instead of telling us they’re considering it. I mean we have enough information already, and adding a “maybe” is just useless.

I have of course shown you survivor bias – that the stocks I mention are the losers of the pack, and others may have seen great gains based on similar rumours. I’ve not seen many in the recent past – though in 2007, all you had to do was mention a stock’s name and “acquire” in the same sentence for it to go up 10%. However, please notify me of such stocks you’ve seen recently, to keep me honest.

I suppose this boils down to a mantra: