Nikhil Pahwa rants about the ecommerce business in India. In a short summary

I have to say I agree with the fact that the regulations are nonsense. But FDI rules are rules everyone has to follow, and some of them are justified in the context of foreign players having a a head start, lower cost of capital, and ability to absorb losses till competitors are out of business. FDI restrictions are present in many sectors – media, petroleum, banking, telecom, etc., and they exist even in the US (aviation, banking, broadcasting etc.).

Retail in India is tricky, since the small retailer is a big votebank and demands protection even from larger retail (non FDI). Such an issue is political and the government has left the approval to individual states about whether an FDI powered retail unit can be set up in their state. The bank on ecommerce, in my opinion, is to avoid circumventing of a state ban on FDI in retail by using ecommerce instead.

But it is silly, no doubt, and our retail market is strong enough to withstand the onslaught of foreign capital; in fact, it is largely Indians that benefit from this foreign capital business.

The reformed broker says we’re asking the wrong question, if we want to know it’s the right time to get into the market or not. The US Dow has made a new high and he says this:

Between 1926 and 2010, there was not a single rolling 20-year period – pick the starting point in any month of any year during that eight-decade stretch you’d like – with negative returns for stocks. Hasn’t happened.

What that means is, if you put in money now, it’s quite likely that you don’t lose any of it 20 years ahead. I have done a study of that in India and found that there aren’t any 10 year periods (using the Sensex) that show a large loss either. Only three months in 2002 are below zero, with the max negative return being –1.5% for a 10 year SIP. (Returns shown are annualized returns) 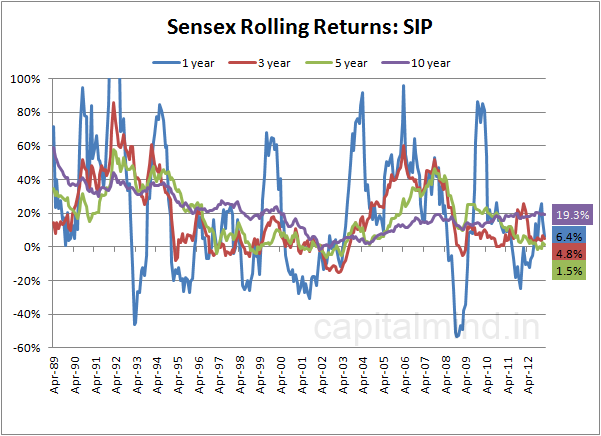 Which means invest in stocks now? Well, it does mean that if you don’t have time to analyze or time the market, don’t bullshit around and just put in money every month, and allocate some money to equity and other money to bonds/debt. If you can make the effort or are a full time trader, this rule obviously doesn’t apply.

A Shiv Sena Rajya Sabha Member (Anil Desai) has demanded that the 2.25% levied on mutual funds as an entry load should be brought back. The ban, he says, has led investors to go buy gold which has led to the increased current account deficit.

I see, so I suppose that before the entry load ban, people were wearing mutual fund certificates around their neck. I must have missed this entire phenomenon.

India's biggest and most honourable ragpicker is here. It's the "Bad Bank", to be known, in traditionally uncreative Indian public fashion, National Asset ...