Cyprus is now in the news, as it gets bailed out by the IMF, the ECB and the European Commission. Unfortunately, as a condition for the bailout, all bank deposits in Cyprus above 100,000 euros will pay 9.9% “one time” tax to pay for the bailout.

These moves are supposed to give the government 5.8 billion euros. Neary half of this comes from wealthy russian investors who had deposited money into Cyprus-based banks, and who will pay this tax as well. However, most Cypriot residents will be impacted, including pensioners.

They are, quite unsurprisingly, trying to take out money from their banks to avoid having to pay this tax. However, banks have already sealed off this much money away from all accounts, so you can withdraw all but the amount of this tax from your account.

Ironically, the reason for the bailout is the bad condition of Cypriot banks, made by bad loans that were given to Greek individuals; but the deposits of these banks in Greece will not have to pay this tax – that means Greek borrowers caused the crisis by defaults, but Greek depositors in these banks won’t have to pay the penalty.

While European leaders say that this is a “unique” case and in other future bailouts, depositors will not be harmed (as they were not in earlier bailouts, including those of Greece), I personally think they will need to. But this is unprecedented, in that it’s only depositors – large senior debt holders of banks don’t pay anything!

Plus, it is grossly unfair that Greek depositors don’t pay – but they had to do that to avoid a Europe wide bank run – and to be honest, I think eventually that is inevitable.

The other steps that the recently elected non-socialist government will need to do is to privatize their telecom, electricity and ports companies. Additionally, they will need to cut the size of the banking sector (8x their economy due to the large operations abroad) and also increase corporate tax to 12.5% (from 10%).

The impact on India: India has a juicy double taxation avoidance agreement with Cyprus, and a number of FIIs and PE investor have registered operations there to extract the best value. Network18 has large subsidiaries (Roptonal, a TV18 holding trust etc.) listed as being based in Cyprus. Reliance Globalcomm has even set up a regional hub there from which they get their next-gen submarine link into asia. If they have money lying around or money in a fixed deposit in a Cypriot bank, even that is hosed (to the extent of the tax).

Also, there is a lesson here. If depositors will take the hit, India might see a situation like this in the future as well. So I would recommend that you keep at least a month’s expense, in cash, in your house. Or, buy physical gold or stocks or gold or real estate. It will serve you well.

Further, it turns out that Cyprus is a fairly large competitor for Foreign Direct Investment (FDI) into India, ranked 7th with about $6.8 billion in the last 12 years (or 4% of the total). From FIPB: 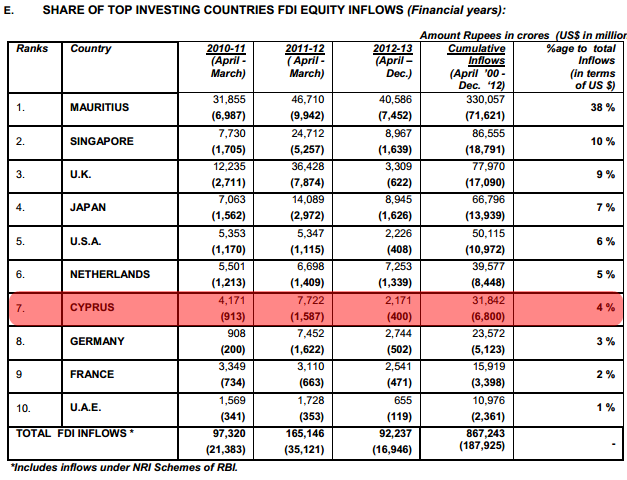 This is not likely to be fun. Will Indian markets correct on Monday from this? Will the rest of Europe panic?

Monday is a holiday for Cyprus, but it will likely get very crazy very fast. Keep your seat belt fastened.