SEBI has just passed an ex-parte interim order (meaning, without hearing the defence of the accused, and potentially more orders to follow) against entities it alleges to have rigged the price of Ruchi Soya, a listed edible oil manufacturer.

Investigations by SEBI seem to show that nine entities – Aventis Biofeeds, Moebius Credit and Capital, Sunmate Trade, Shreyans Credit and Capital, Vision Millennium Exports, Navinya Multitrade, Uni24 Techno Solutions, Betul Minerals and Construction, and Betul Oils and Feeds (all Pvt. Ltd.) – colluded together to manipulate the price on Sep 27, 2012, in order to earn a huge profit in the futures market.

First, the concept. Ruchi Soya was being taken out of the "F&O” (Futures and Options) list in September, with all contracts expiring on September 27. All F&O positions would be settled at the closing price of the equity share, in cash, on the expiry date.

Remember that the closing price is the volume weighted average price (VWAP) of the stock in the last half an hour. To read more about how it’s calculated, I’d created a video which is useful here: 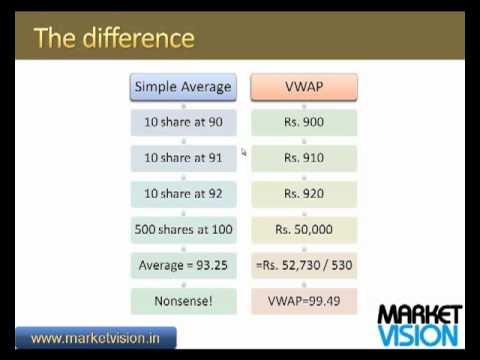 So if you take a position in the futures market, and put a huge buy order and a corresponding sell order in the market at a high price, just before the close, you can easily manipulate the “closing” price of the stock and thus, profit from your futures position.

SEBI claims this is exactly what happened. More than Rs. 5 crores were earned by the above entities, by taking the VWAP up by nearly Rs. 7 (or 10%) by co-ordinated buy and sell orders in the last three minutes of trading (3:27 pm to 3:30 pm). In (SEBI’s) pictures with my annotations: 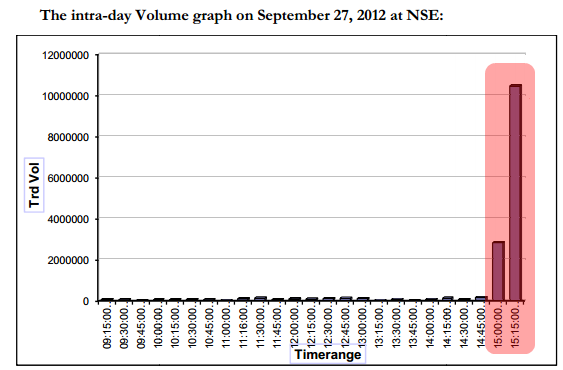 Over 60% of the volume of the day comes in the last three minutes! 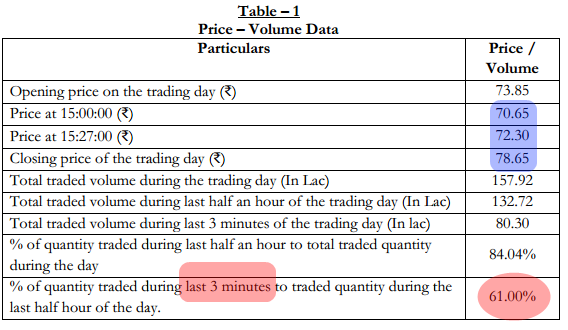 And finally, was this very different from normal? It seems so: 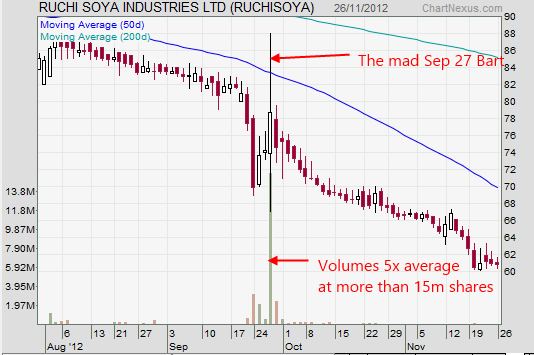 This can only be manipulation if the 9 entities are linked. Which they seem to be, considering many have the same address in Nariman point, or that they share directors, and in many cases, have the same phone number. There is definitely a good case.

Pending further investigation, these above entities have been barred from the market immediately. However, this comes around 5 months too late: it’s now Feb 2013.

Ruchi Soya promoters haven’t been named in the SEBI order, but I hope SEBI investigates their link with the “price manipulation” allegations. Betul Oils, one of the “manipulating” entities (alleged) named in the SEBI order, has in the past been accused by the Forward Markets Commission of conspiring together with Ruchi Soya management, and manipulating guar prices, earning part of 1,291 crores of profit.

Ruchi Soya’s promoters have also been accused, in the past, for share manipulation and other controversies and are supposedly well connected politically. (I’ve written about their steep drop after an IB investigation)

SEBI needs to investigate this thoroughly and, if the parties are found guilty, it must:

a) fine the entities with at least 2x the profits that were made by manipulation; just a ban will not suffice.

b) make such investigations faster through technology. Much of the above could be ascertained through intelligent algorithms.

c) return money to investors who lost on their futures trades, to the extent they did. This would do wonders to confidence in the regulator.

What would be defeating is to have this meander through bureaucracy, and a timid order passed a couple years too late. That would answer partly why retail investors don’t invest in equities – if you can’t even fine or discourage people who manipulate markets, what’s the point investing?

Disclosure: I have never owned or traded in Ruchi Soya, stocks or futures.