The Nifty’s reported Price to Earnings Ratio – revealed by the NSE every day – can be compared with the growth in actual underlying Earnings. Earnings growth, which was 16% year-on-year as recently as 31 Jan, has dipped to 11.86%, while the P/E (on a standalone basis) is still 18+. 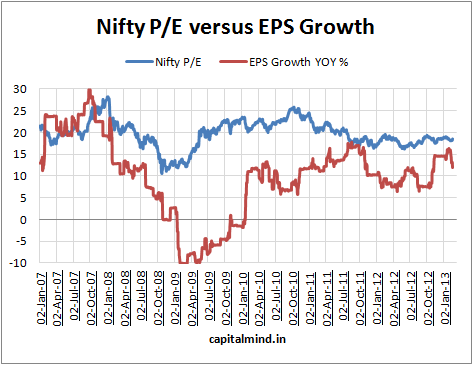 The October quarter showed some good results (also due to a rejig in index stocks, replacing two weak ones by stronger earning stocks), taking earnings growth to >10%.

However, if you consider that you pay today’s P/E for tomorrow’s growth, then the P/E one year ago must have reflected today’s growth – so was the P/E last year about 12? Let us phase shift the P/E one year back and see where we were. One problem with this analysis is that it does not use consolidated numbers even where those are revealed by stocks. I believe the picture is likely to be the same or similar, but a large acquisition (like Tata Steel or Tata Motors have done) might skew the EPS and P/E numbers substantially. I’ll have to leave that for another day.