LiveMint has an article by Monika Halan and Deepthi Bhaskaran talking about how investors lost Rs. 1.5 trillion (150,000 crore) rupees due to mis-selling.

I’m however not convinced by their number argument, that investors lost 1.5 trillion rupees. The way they arrive by the numbers is: (Above Figure from Livemint)

This figure, over years, adds up to 1.5 trillion rupees.

Not Exactly That Much

But this isn’t exactly true that investors lost this much (or more, as the article argues); the assumption is that if people don’t pay regular premium they lose all their money. While most ULIPs made you lose your money pre-2009, much of the money in 2010-11 and 2011-12 is safe in that regard (other than certain charges) due to IRDA’s changed regulations that if policyholders don’t pay premium, they still will get back their account balance at discontinuation five years after inception with 4% interest.

For “traditional” policies, surrenders still carry a payout. According to the IRDA’s 2011-12 annual report, insurers paid out (for surrenders):

Adds up to 145,000 cr. (1.45 trillion) in just two years of the total six. This is money returned to investors – money investors got back. They did lose some money – nearly all investors seem to do so in insurance – but not quite as much as 1.5 trillion.

The core assumption is that investors in ULIPs lost all their money if the surrendered in the first three years, for policies started before 2009 September. The above data and figures are of “all” policies (not just ULIPs), includes years post 2009, and doesn’t know about policies surrendered after three years, so the conclusion that Rs. 1.5 trillion has been lost might be a little exaggerated.

However, I must admit I need to do more research to come up with a counter-number of losses, which are likely to be available with more data crunching through the journal and reports of individual insurers.

Insurance is a Bad Investment

While we might debate whether investors lost X or “only” Y, we will all agree that investors lost money. Insurance is fine from the aspect of term policies, where if you live you lose that much premium. But the concept of insurance where you get your money back, has been a losing proposition.

We speak here of losing money that you invested. We don’t speak of the opportunity cost, or the fact that inflation would require your money to have grown by about 8% per year just to retain purchasing power.

A larger problem in my view is that insurance company IPOs will be in serious trouble. According to an Oct 2012 Goldman Sachs report, insurers have a substantial amount of their profits coming from “lapsed profits”.

The pool of lapse profit represents amounts that are identified by the Appointed Actuary in
respect of lapsed policies that are entitled to be revived but not likely to be revived. Such
reserves are required to be held as an earmarked reserve until the expiry of the revival
period (two years), after which the same can be released in the P&L statement. 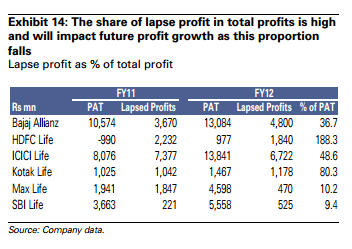 Such lapsed profits are declining due to the inability to pass such reserves into insurer profits (they will go back to the policy holder). If such profits are at stake due to changed regulation, the ability of these insurers to show great profits as they launch IPOs becomes suspect.

Furthermore, growth in new premium has stalled. The “NAV Guaranteed” products, which account for a good percentage of private insurance products sold, are stunted by the guarantee. The real scope for growth is pure term, and then non-life (like car, home and health).

Profit from lapsed policies is going to be a tough thing to maintain and the writing was on the wall in 2009 when the new ULIP regime came about. It would be more useful to think of insurance in the kind of timeframe that they want policy holders to think about: Sustainable profits in the very long term, and only if bad things don’t happen.