The Employee Welfare Trust (EWT) of IndiaBulls Financial Services dumped 2.4 crore (24 million) shares of the company in the market, at a price of around Rs. 284 per share.

Some of the shares were bought by:

Overall, 11.5 million shares, about half the dumped shares, were bought by the above entities. The stock has fallen 4.7% to 284. 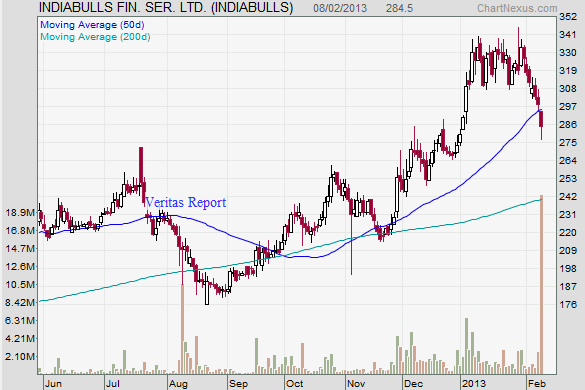 IndiaBulls (Investor Relations office Mr. Shah) has reverted with clarifications on their EWT structure and the reasons behind the deal. I didn’t talk to management before this post – all opinions were made using only publicly available information, linked where necessary. I do not talk to management in general, and I believe that analysts should not get specific disclosure that is not made publicly. However, in this case, I must apologize for not getting the exact quantum of the loan outstanding, the answer to which would have negated the possibility of a loss.

I will write in more detail, but before anyone accuses me of stock manipulation, please note that I have not had any positions in the year before, during, or after this post as of 15/2/2013. Further, since Indiabulls have chased an associate of Veritas with a court case accusing him of demanding money for not releasing a report, let me categorically state that I have never contacted anyone related to Indiabulls about this story.

Remember that Veritas, the Canadian research firm, had questioned the role of the EWT with their Indiabulls report. I had then written about the IndiaBulls EWT in particular (Read: Veritas-Indiabulls Fight: The Employee Welfare Trust).

Thus, the share price needs to go up for the EWT to return the cash – otherwise, options aren’t going to be exercised. This is a huge risk.

Also it amounts to the company buying its own shares in a way – it is lending money to a related entity, that buys its shares.

The quantum of the loan is totally out of whack. 900 cr. could buy more than 3 cr. worth of shares; the outstanding equity option count was way below that (less than 1 cr. shares in existing schemes). However other options in the pool remained unvested.

Also note that SEBI has banned Employee Trusts from buying shares in the market in Jan 2013.

I had noted that it was disburbing Indiabulls was not revealing the EWT stake if they did indeed own it. Almost on cue, in the September 2012 shareholding pattern note, they declared the EWT as owning nearly 10% of the company (3 cr. shares).

(Note 15/2/2013: Indiabulls has told me that since the shares were held in trust in employee names, they were small holdings. I don’t believe this is maintainable – this would have to exclude all such “pooled” holdings then, like mutual funds or even FIIs. I believe they should have revealed the EWT stake earlier, under any circumstances)

In December the EWT owned 2.48 cr. shares. (The EWT must have sold the difference in between)

Did IndiaBulls lose money lending to the EWT?

In their conference calls they have mentioned that the average cost of Indiabulls shares for the EWT was Rs. 175. That would have resulted in a loan of only Rs. 525 cr. to the EWT.

However, the money they would have realized from the the sale now is a little short of Rs. 900 cr. (Note: it’s actually 850 cr. as per their Feb 8, 2013 press release) Even considering that the dividend in the last 12 months has been Rs. 20.5 per share, they would have got just a little more than Rs. 60 cr. in dividend.

The proceeds of the sale plus dividends equals Rs. 960 cr. This is short by around 130 cr. Since the EWT has no more holdings, what happens now? How can the EWT pay any more? Is this a hit that Indiabulls will take?

Note that a Rs. 130 cr. loss is not a huge amount – it would hit their next quarter’s profit by about 25% but it’s one-time in nature.

The total amount of loan to the Trust and its subsidiary Ceraon, together with interest thereon, as disclosed in the last Annual Report for FY 2012 stood at 976.17 crore as at 31st March 2012. The Trust held nearly 3.1 cr of IBFSL equity shares, and additionally held shares of other listed group companies.

Out of this amount of Rs 976.17 crore collectively owed by the Trust and Ceraon to IBFSL as at 31st March 2012, an amount of Rs 441.16 cr was repaid by Ceraon in August 2012, which was funded by the other Settlor Enities and financial institutions.

The Trust has repaid the balance amount of loan outstanding to IBFSL  together with up-to-date interest out of the sale proceeds of IBFSL shares. It is further clarified that with this, the entire amount of loan advanced by IBFSL and its
subsidiaries to the Trust and its subsidiary, Ceraon has been repaid in full together with the accrued interest as of date. The loan amount from IBFSL to Trust stands adjusted with full payment of both the Principal and interest amounts in their
entirety.

Post this, I believe there are two things that I have mentioned that were wrong:

a) that the loan was still 900 cr + – this was an incorrect assumption, and I was not aware of the 446 cr. returned in August 2012. This was supposedly stated in a conf call, but the transcript I have seems to not have that part of the conversation.

b) If Rs. 446 cr. was already returned in August 2012, this transaction of sale will more than cover any loan given by Indiabulls. There is no question of any loss, in that case.

The only reason one should probe this is because all shares have now been sold by the EWT, and presumably they have not cancelled any existing stock option plans; that means they intend to only issue new shares to the employees as they vest. Why not keep the shares in the EWT and just not buy any further? Too much interest cost?

Gagan Banga was confident in his conference call that just dividend income would be enough to offset the interest cost for the EWT. However that is not sustainable, I can imagine. But SEBI can’t ask why (there’s no forcing a trust NOT to sell shares) – they can only probe to see if there was fraudulent trading, with an intent to manipulate, or inconsistent with the concept of the ESOP trust.

(Note 15/2/2013: Out of the above, I think SEBI might have a case in asking why shareholding patterns didn’t reveal the nearly 10% stake held by the EWT, from Dec 2010 to Jun 2012. However, there is no loss to the EWT or Indiabulls in the above deal – if anything there’s a profit of a few hundred crores.  Also, there is no evidence that the trust actually traded frequency in the shares of the company, though SEBI can confirm this very fast. )

IndiaBulls finance will soon change its name and become a pure housing finance company. I will avoid buying; given the new float in the market, I presume that the stock will remain under pressure for some time. Secondly, the results have been great, but housing in general will go through tremendous stress in the coming years, and I don’t want to touch a lending business in that area.

I also think that the company is likely to see some sort of SEBI probe. If we are asked why we don’t invest in stocks, as retail public, it is simply because when things like this happen and there is no investigation, we tend to believe the market is rigged in favour of big companies. A change in image can only be brought about by investigation and imposing heavy penalties on big-company defaulters.