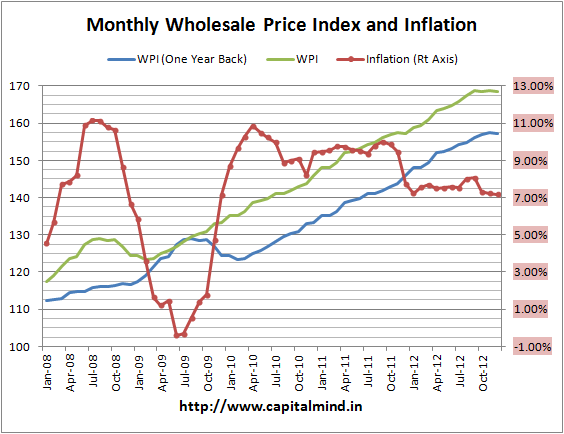 You can see the green line flattening away, which is indicative of this abrupt drop in inflation. If prices don’t spike back up in January we should see a lower figure next month.

The components show moderation in the manufactured goods department: 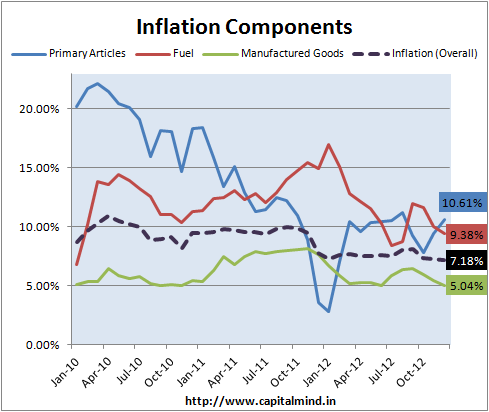 What I don’t get is: when inflation among fuel and food are so consistently high – and food, as you can see, is increasing – how can manufactured goods stay low?

Looking through the data, I noted that 1/3rd of the manufactured goods data in both percentage terms and weightage has seen no change in the last few months. It simply might be that these prices aren’t updated.

Revisions come in lower, for a change

However, this month’s data has a real positive, that the revised number for October 2012 is now actually lower at 7.32% than the first revealed number of 7.45%. 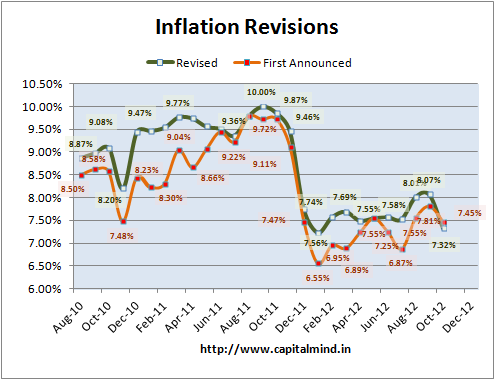 Consumer price data was out on the same day. CPI inflation came in at 10.56%, in a rude shock. This is the highest we have seen consumer prices rise since the new index came into being (Jan 2011). 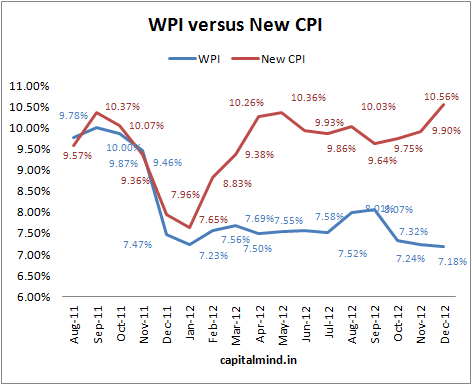 The figures of August 2011 to Dec 2011 are annualized from part-year numbers.

The problem, though, is now evident in the components. Food is a significant part of consumer price inflation and we can see it here: Food at 13% is plain scary. Housing, Clothing and Others remain high at 10%+. Fuel and transport costs are lower than 9%, but my personal experience is that this is not really true; both diesel and petrol prices are higher by about 10% today, compared to last year.

The food focussed price rise is now hurting the rural consumer more than the urban one, for a change. 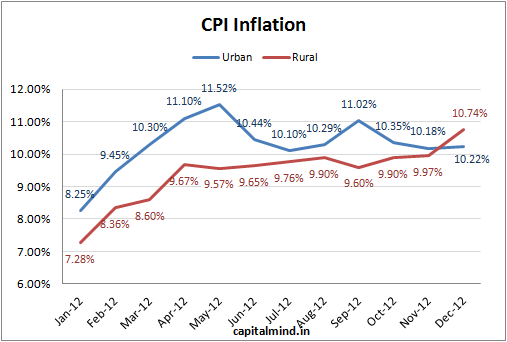 This is not good political news, as inflation is a really important topic for rural votes. Even urban prices are up above 10%.

The Silliness of “Core” Inflation

Many people believe that the RBI should focus on “core” inflation, which is basically the index minus food and fuel.

I think that is silly.

If you don’t eat and don’t travel anywhere, you won’t notice much inflation, I agree. But is this the Indian consumer that the RBI should be targeting?

The rationale however is that RBI should ignore volatile prices since they even out over time. That makes no sense whatsoever. Just because prices are volatile doesn’t mean they aren’t important, or that they don’t have inbuilt inflation. Food and Energy are important parts of inflation, and in India the build-up of inflation are important because these primary items are huge parts of our life.

Secondly, the data collection on “non-food, non-fuel” items in the wholesale index leaves much to desire. Consistently, between 15% to 40% of these items are not updated regularly. Plus, since such prices are not in a traded form, but rather a collection estimate, they aren’t as reliable. A traded price is always more reliable than an “estimate” because you know the other party is willing to put money on the table at this price.

Lastly, RBI policy impacts everything, including “volatile” items. This is reason enough to please include fuel and food in any policy decisions.

I think we should immediately stop this nonsense of focussing on core prices. While doing that, we should also go to using the new CPI rather than the WPI. Consumer prices are more important to focus on, since they contain vital components (Housing, Services) that aren’t in the WPI.

On January 29, RBI is likely to introduce a repo rate cut. I say that because they have recently moved to a policy that targets growth rather than inflation, and growth has suffered. However, the CPI inflation is so high that it might limit their cut to only 0.25%. The other thing is that bank NPAs are going up, and a rate cut is likely to give people the indication that the RBI is there to help.