Continuing the paused rate cut cycle, RBI cut the repo rate (at which banks borrow overnight from the RBI) by 0.25% to 7.75%. In addition, it brought the Cash Reserve Ratio (CRR), the percentage of deposits that banks need to keep with RBI in cash, down to 4%, a 0.25% cut. 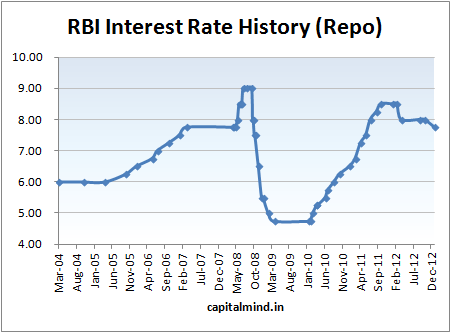 The interest rate cut cycle has a long way to go, of course. The cuts are despite inflation at hte consumer end showing an extremely high level, with CPI at 10%+, and rural inflation clocking more than 11%. Much of this is food (which has a lower weight in the WPI, the wholesale prices which RBI considers as inflation).

The RBI says there are three reasons for their cut:

First, both headline wholesale price inflation and its core component, non-food manufactured products inflation, have softened through the third quarter. This provided some relief from the persistence that dominated the first half of the year. Several indicators such as the weaker pricing power of corporates, excess capacity in some sectors, the possibility of international commodity prices stabilising as well as inflation momentum measures suggest that inflationary pressures have peaked. However, further moderation in inflation going into the next fiscal year is likely to be muted as the correction of under-pricing of administered items is still incomplete and food inflation remains elevated. Accordingly, the setting of monetary policy has to remain sensitive to these conflicting pressures and attendant risks.

9. Second, growth has decelerated significantly below trend through the last fiscal year and through this year so far, and overall economic activity remains subdued. On the demand side, investment activity has been way below desired levels and consumption +demand too has started to decelerate. External demand has also weakened due to languid global growth. On the supply side, constraints in the availability of key raw materials and intermediates are becoming binding. While the series of policy measures announced by the Government has boosted market sentiment, the investment outlook is still lacklustre, especially in terms of demand for new projects.

10. The third consideration that informed our decision is that liquidity conditions have remained tight. Although the Reserve Bank lowered the cash reserve ratio, CRR, successively in September and October 2012, and carried out open market operations (OMO) injecting systemic liquidity of `470 billion during December and January to augment liquidity, the average net LAF borrowings at `910 billion in January have been above the Reserve Bank’s comfort level. This tightness could potentially hurt credit flow to productive sectors of the economy. The structural deficit in the system provided a strong case for injecting permanent primary liquidity into the system.

In short, the RBI is sacrificing the control of inflation to push growth. It’s strange though, that the factors they mention about inflation can actually be controlled through monetary measures, but hte factors they talk about for growth won’t really be impacted. Think about it: External demand can’t be created by lower interest rates. Constraints in raw materials too, are largely about government policy and not interest rates. Even investment is curtailed because of bad policy – the ridiculous incentives for real estate make nearly every other investment unpalatable.

And from an industry perspective, license raj prevails with licences required for everything from natural gas to telecom to telemarketing to even being an investment adviser. There is no promotion of heavy competition. In fact, where are the new bank licenses? We should have at least 500 scheduled banks in the country, and we have less than 100. In that kind of environment, interest rates aren’t your bottleneck; investment will happen when you free our markets.

The large number of NPAs have forced bankers to constrain credit, says the RBI, but they should continue to lend. This is not consistent with any logic that restrains new entities from becoming banks. To increase productive lending you have to let banks die and new ones emerge. (We should of course get deposit insurance of, say, 10 lakh rupees per person, and charge banks for it)

Overall, the policy has not met expectations of the stock markets (which seemed to desire a 50 bps cut) and just about matched what the bond market reflected (10 year yields are around 7.86%). The cut in CRR is good for banks for protecting their margins for now, but the default cycle is in its early stages and you can safely assume that any “liquidity” created by the CRR cut is likely to flow to mask bad assets. (That is: You default, but I lend you more money to pay me back, so I can stretch your default to another 90 day cycle. I’ve lent more money out, but to no “productive” use.)

Expect the next move to come from the budget. RBI policy has moved strongly towards growth, so buying gilt bond funds may be a good trade; however, inflation is likely to be a party pooper. Will banks cut interest rates? I can imagine deposit rates will be cut but lending rates may still take a while.