Folks, hope you all have a great year ahead. 2013 is here and it’s time to celebrate the new calendar year, which means you have to write an entirely different year in your cheque book dates. But other than that there is no relevance for India – our financial year ends in March, as does school.

The coming year has interesting things from a financial perspective. Already, the Nifty has made a new 52 week high, closing at 5950, the highest since 6 Jan 2011. 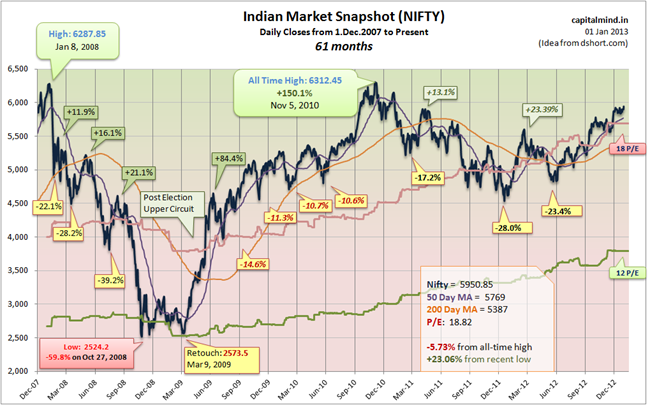 The month of December ended at about 5900 on the Nifty, a minor crease over November. Incredibly, December continues to be the best month, historically, for equities, with only two instances of seeing down Decembers in the last 18 years (1994 and 2011).

From an annual perspective, 2012 gave us great returns, but not overwhelming. 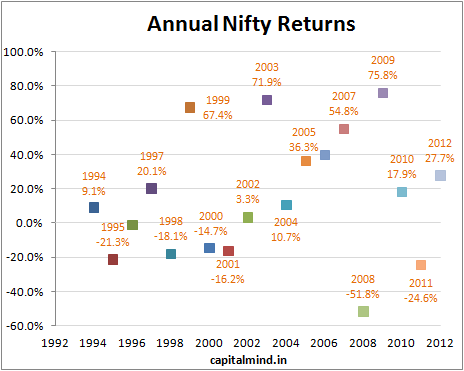 I’m a little worried that markets have given negative returns in just two of the last 10 years. I know, great economy and all, but it’s not like we have been undervalued so much.

Good things, because we must be optimistic that good things will happen. However there are things to watch out for in India.

What am I doing?

My consulting contract ends in Jan, and I’ll be getting back into full-time writing, analysis and trading. I am looking to provide portfolio advisory services for a select group of investors. I am also looking to build my brand of market analytics, investigation and outlook into a packaged product, details of which will only come post February.

On the investing front, it is time to start moving money into bond funds. I don’t yet know what kind of funds and all that – more about that later. The point about lower interest rates is that bond prices will rise as "yields" get lower.

For stocks, my investments in SmartLink and Piramal Healthcare are paying off with both of them going up over 20% from my purchase price. While I haven’t invested in too many stocks (other than pure trading picks like CERA Sanitaryware or PTC) I have realized that it is useless to invest without proper analysis. Thus, the resolution for this year is to investigate, apply discipline and increase allocation to stocks.