Too many people attribute their success to their own skill. At some point, when everyone is working their asses off, you begin to wonder if success has quite as much to do with talent, effort and skill, as it does with being in the right place at the right time.

People like Samir Arora of Helios have done incredibly well in the markets. However his tone in this piece named "Do not invest in Indian equities" at outlook has me wondering. The note is arrogant and sarcastic (both aren’t bad qualities by the way), telling us ignorant retail folk that:

Lucky in choosing when to invest

He extols the fact that if you see movies, a PVR investment is up 3 times since 2008.

Life isn’t just about making and investing money; it’s important to enjoy life’s little pleasures. So go watch a movie at the multiplex and munch some popcorn while you’re there. Meanwhile, we’ll buy shares in PVR (up 3 times in four years).

Wait, wait, Mr. Arora. Let’s back that up another three years, and go to their IPO in 2006,when they issued shares at a price of Rs. 225. If you were lucky enough to have been alloted shares, of course, since the issue was oversubscribed 11 times – showing that retail interest in stocks was up the frikking wazoo, and right up that alley you’re currently standing in, Mr. Arora. In that frenzy, PVR listed at Rs. 266 on opening day, an 18% premium. So if you didn’t get shares in the IPO you could have tanked up at 266.

And then repented at leisure, because: 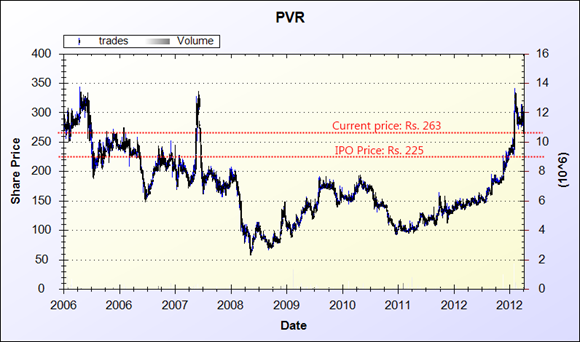 You could have watched endless movies between 2006 and now, but the PVR stock has been a dud for most of this time. Now, when you might be seeing a tiny uptick that just about brings it back to even, you find Mr. Arora gloating.

If you bought in the IPO you were plain unlucky. And it’s not just retail – even FIIs and institutions have cut their exposure to this stock, from a total of 49% holding in 2006 to 22% in 2012.  In fact, from 2008 till now, retail (as in non-institutional) holding in PVR is up substantially.

The problem isn’t whether retail holds this stock or not. It’s the timing of the purchase. If you got in at the depths of 2008, you were most likely darn lucky.

Assuming the lack of luck, means that every loss that you make is attributable to sheer lack of talent. Lack, perhaps in identifying Arshiya, where the stock has dropped from 130 to 39 in just January 2013, and where Mr. Arora has a significant stake.

There are countless examples of duds. While you could have watched movies in PVR, you could have used a mobile phone as well. And more people are using mobile phones today, compared to 2008, than watching movies. Yet, nearly every mobile company has been a dud. The mobile infrastructure players too – like GTL infra – are down substantially. India has a shortage of power, no? Power companies are on life support in the stock markets. More people are flying airplanes than ever? The stocks aren’t exactly flying anywhere.

Sure, you could say that net-net, we’re still making money. Yes, net-net is the point. But whatever little strategy you have, it involves a substantial amount of guess work. You can only guess what the future looks like, based on some figures that someone has given you. Those figures may be wrong.The assumptions may be wrong.

When they are, you can attribute those to luck.

When those assumptions work out, it’s the same lady that’s doing it: luck.

We could avoid the hubris of attributing our success to skill, when what we do is quite as much about luck as it is about skill.

I’ve been incredibly lucky. Luckier than my dad who lived in a village and walked a long distance to school, and made his way up the ladder the hard way. Lucky to have had the opportunity to study and go to college, when millions don’t. Lucky to have a government fee structure of Rs. 2,000 per semester in the college I went to. Lucky to have graduated in 1996 in the heart of India’s IT revolution, giving me a great start. Lucky to be in India’s great growth story through the 00s. Lucky to be able to write this in a kinda-sorta-free country.

There is some skill involved

When opportunity knocks, you gotta open the darn door, not just sit around. So yeah, the people who work hard succeed because they take the luck and make it work for them. That is not unimportant. It’s par for the course. Gotta work hard. Or smart. Or something like that. Don’t take away the wrong meaning that if it’s luck anyway, let me sit and do yoga while I wait for luck to drop money into my bank account.

Focus, then, on getting lucky

This is what one does in much of life anyway. But I digress.

But the true point is: take chances. Calculated, or whatever, but take those chances. If you don’t bet, you can’t win. For the entrepreneur, it’s about creating and following many leads, chasing many investors, hitting different markets; you never know what will succeed. For the investor, it’s about taking bets when you’re reasonably confident and not waiting forever.

It’s also about admitting mistakes (and attribute them to luck if it makes you feel better) and moving on. After all, if it were skill, then you’d never get out of a stock. And that only helps sell Warren Buffett books.