Reliance announced “stellar” results on Friday, post market close, which has traders wondering if the market will gap up today by 100 points or 200 points. However, the question is, how are these results. I’ll post you some figures which will put the numbers in perspective.

While profits were falling in the previous year, it seems that the trend is reversing this year. Reliance is obviously a low margin business, generating a net profit of just about 6% of revenues, but they have very strong revenues.

This quarters numbers look better because of the massive dip seen last year, when the quarterly profit dipped by nearly 14% to 4,440 cr. So this year’s figure, while impressive, is still lower in terms of absolute profit than September 2011. 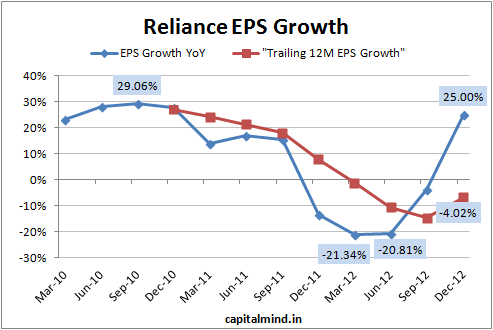 Their Exploration business isn’t doing all that well. However, that can change as the government decides to relax restrictions on the output pricing and profitability of RIL’s oil/gas business. The decline in numbers is steep. 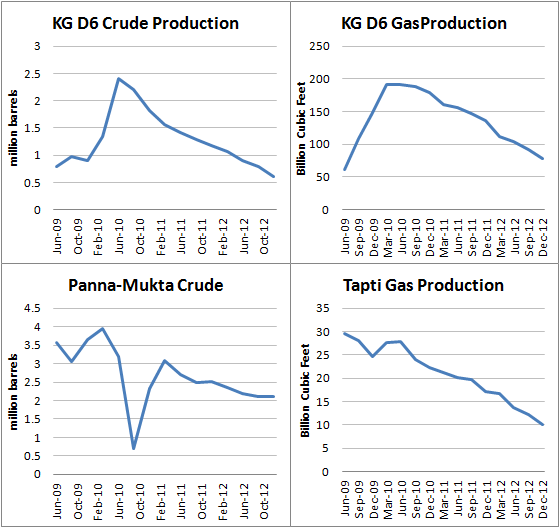 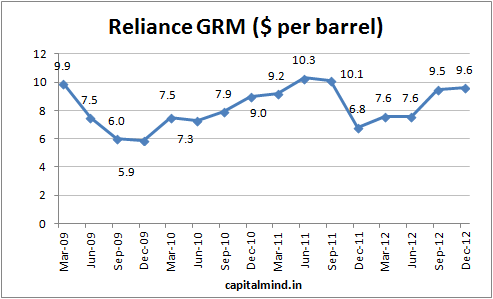 Refining is the biggest unit of the company in revenue terms, accounting for about 80% of turnover. 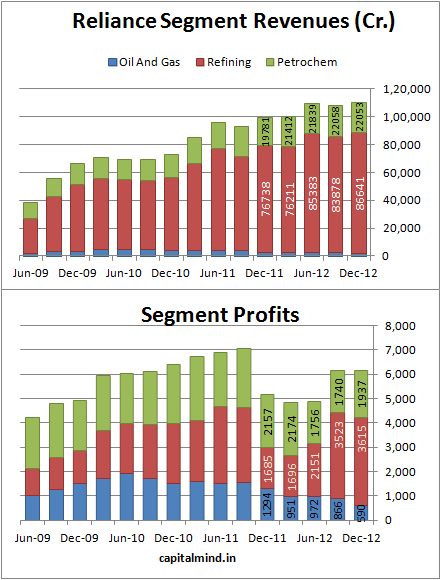 Profits in refining are very relative to the gross margin and the dollar-rupee exchange rate. Both worked in Reliance’s favour in the December quarter.

The Retail business has seen over 7,000 cr. of turnover in the first nine months, but it doesn’t look like it’s profitable (they would have announced that in BOLD). Their 4G telecom business hasn’t even started; after three years, they don’t even have a byte to show.

Reliance’s borrowings remain at Rs. 72,000 cr. (stable over the last three years), while cash from the sale of part of their E&P holdings to BP has made them “cash free on net basis”. 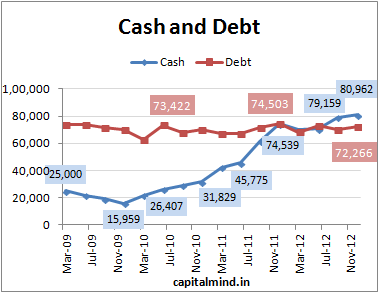 Since a good portion of the borrowing is in foreign currency, the costs and outstanding values in rupees fluctuates. They supposedly can’t retire debt that easily because it’s in market instruments (bonds, FCCBs etc) but I’m sure if they really tried hard,they could find ways to net them out.

They have finished their buyback as well – a promised 10,000 cr. worth of buybacks resulted in a tiny 3,800 cr. being spent, even though the stock traded much below the Rs. 870 price most of the buyback period. 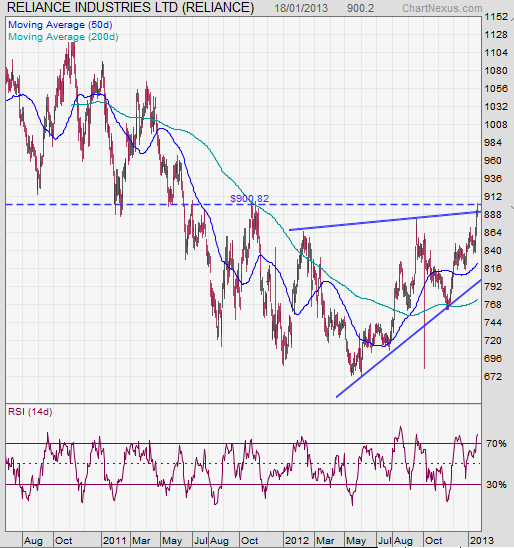 Even the MACD (not shown above) has turned positive and the stock looks like it will break through the resistance of 900. Volumes are decent, and options show good interest (lots of open interest: nearly 1.8 million in the 900 calls, 500K in the 900 puts and a 3% move expected in either direction.)

Overall, decent results. With a low net margin that is subject to the vagaries of refining margins, the P/E of 15 doesn’t seem undervalued. They have supposedly “beat expectations” but that is neither here nor there, as analysts expect everything distant from reality. So let’s see how the stock does.