Wholesale Price Inflation was at 7.81% in Sep 2012, the highest in 10 months. Remember, diesel prices were increased in mid-September, and about half that impact is visible in September monthly numbers. 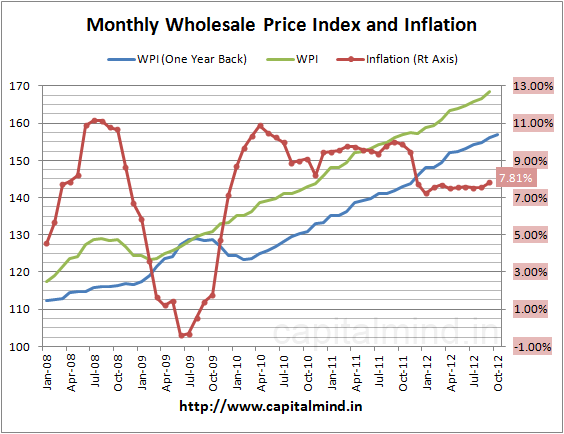 Unfortunately this has meant the return of the massive past revisions, with July data first announced at 6.87% but which is now revised up to a whopping 7.52%. As you can see, the gap between the originally announced number and the revised numbers is growing yet again.

More importantly, every single number that was first announced at less than 7% was revised to above 7% in 2012.

But that’s how bad this data is, and even so, we trust it. Let’s look at the components: 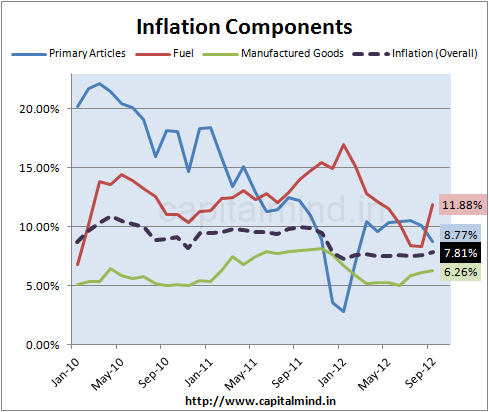 The spike in fuel prices is expected, but a drop in Primary Articles doesn’t sound right. But these numbers are revised anyhow – just two months ago, July fuel price inflation was first announced at less than 6%, but it’s now revised to above 8%!

Manufactured goods, though, haven’t spiked up yet. At 6.26% the graph is rising but not of major concern. I would really be worried when that crosses 8%.

Given this situation and the fact that even a single of the recent reforms won’t change ground realities for supply in the next 12 months, I don’t think the RBI has room to cut rates. In fact, if anything, it should raise rates by 25 basis points, to counter the excess liquidity it has made available through the recent CRR cuts. High liquidity and high inflation are a problem, and to curtail demand we need to keep rates high. But then, I’m not the RBI, so let’s see what they do on Oct 30th.