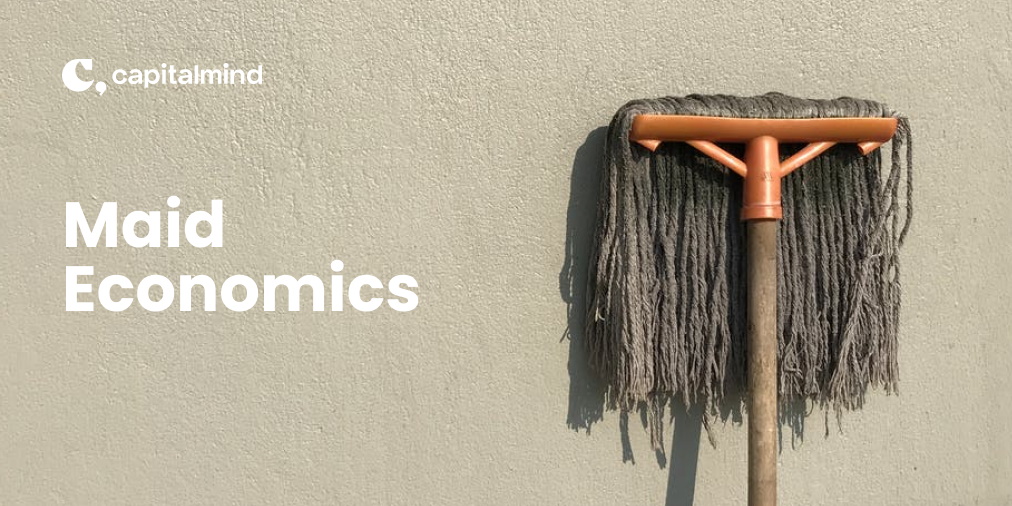 I write at Yahoo about Maid Economics:

The luck of the draw has allowed me to live in various cities — most recently, Gurgaon and Bangalore. In every single instance, residents of the apartment associations have complained of how maids or drivers or household help in general have raised their prices.

Or that they leave to take up another job for a marginally higher pay. Or that they become “arrogant”, demand advances and bonuses. The response of the employers is to attempt to create rules for the “society” such as:

a) Provide a chart of pay for activity and tell every household to pay only that much.

b) Ask for “no-objection certificates” from past employers if any household help attempts to move elsewhere.

In my opinion, this is the possibly worst response to rising wages. Let me replace the word “maid” by “software engineer”. Would we be happy if companies got together and said we’ll only pay this much for this job — and no other employer can offer you more? If this actually happens, it could be construed as an attempt to cartelize and force artificial pricing in a free market — the market of jobs.

Our household help is no different. Considering that salaries in general have gone up, and that more and more people require regular household help, it is only likely that the prices of pieces of work will go up. Supply of such people isn’t increasing dramatically — especially in cities like Bangalore or Delhi — and demand is rising exponentially. Wages must go up, and it would be silly of us to try to prevent that.

Secondly, any attempt to fix prices will be met with resistance, from homeowners themselves. If one person can afford to pay Rs. 10,000 per month and needs the help desperately, she will pay. It doesn’t matter that everyone around her are only paying Rs. 6,000 per month for the same job. You might think that this is a disservice to society, but the hurt you cause a neighbour will be negated by the joy you give a maid with the higher pay. And in the end, it is pure economics — I can afford it, so I will pay higher.

Also consider that people who work full-time or part-time in a household have a very tough job with skewed economics. A full time live-in household helper will usually be working from 6 in the morning to about 8 pm at night, with very few breaks, controlled food intake and probably an hour to herself during the day. No holidays. Even for those that work part time in each house — someone who sweeps and does dishes — will probably do 10 houses doing hard physical labour. This kind of work has a limited horizon — at the age of 40, they will probably have to retire and live off their children, as their competition (younger people) will have more energy.

With such a profile, they get no pensions, no retirement income (like gratuity or provident fund) and no insurance, health or otherwise, paid by their employers. They are also fired without severance, and sometimes can’t even collect arrears. They are accused of theft if anything in the house is missing, even if it was thrown out by accident by the employers themselves. They don’t get to unionize, or demand better working hours or conditions. They live a tough life and most live their lives with more smiles than I would if I was in their position.

Given all of this, it is very surprising that many of us think that when we give them a few clothes, or pay for their kids’ education, it is charity. It is not. It is our job as an employer who won’t give them any perks. And we still aren’t doing enough; we need to be helping them save for the inevitably-early retirement.

One repartee is that maids and drivers themselves form a cartel. That they raise prices by discussing wages with each other and don’t let anyone charge lesser. This is not just true of maids and drivers. It is true of software engineers, factory workers and even managers. Prices go up to the level that can be afforded. The correct thing to do is to ensure that no one tries to use force to stop anyone from offering their help, but beyond that, it’s just market economics.

What we should aspire for is an India in which the cost of household help is so high that only the super rich can afford it. Not through artificial restrictions like a minimum wage or “licensing” or through hair brained NREGA schemes, but by free market measures. Because it means that those desperate for work (who currently offer services as maids and drivers) have found better paying (or more meaningful) work elsewhere, and that means they are no longer desperate. You might say this should include other professions like garbage collectors, security guards and so on — to which I agree, but economics states that if the pay difference is too high, they can always take jobs as household help. This means that if the wages of household help is out of reach of the “middle class”, then every such profession gets high wages. And voila, being household help will become a middle class profession.

For that, we’ll have to ensure that radical elements don’t try to “throw out” people from other parts of the country (and if I must say it, other countries) to protect their own. We’ll have to enforce the current rules such as no children below 14 working, and to throw any employers that have used physical force on their maids in prison. We’ll have to find a way to provide health insurance to this unorganized group, and retirement benefits. And the “we” is everyone that is reading this article.