With Food inflation (Primary articles part) still in double digits, and fuel inflation going up, the 7.55% top number is dangerous. Consider that with the diesel price hike we are likely to see even greater inflation numbers for September.

Revisions: As usual, revisions are scary. Inflation numbers for Jun 2012 have been revised up to 7.58% from the first announced 7.25%. 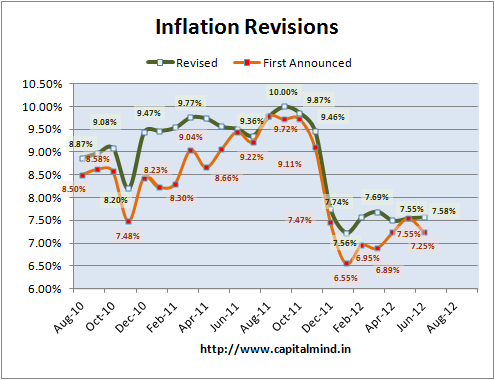 Notice how in the original statement the graph seemed to have sloped downwards in June, meaning inflation came down from the May number. But with the revised numbers showing that June was actually HIGHER inflation than May, it’s a completely opposite conclusion (if you thought that inflation was coming under control, well, it was not.

Strangely, in the post about June inflation, I complained exactly about the revisions (at that time, they chose to revise MANY past figures).

The problem with such revisions is that you don’t trust anything. I now doubt last month’s sub 7% initial print and am sure it will be revised upwards in October.

What this also means: it is unlikely the RBI will cut rates on Monday.