July 2012 Inflation on WPI has come in at 6.87%, a lower figure than than the 7.25% in June. But these figures are revised constantly (like I noted last time, the first announced figures for Jan, Feb and March 2012 were all below 7% and later revised above) 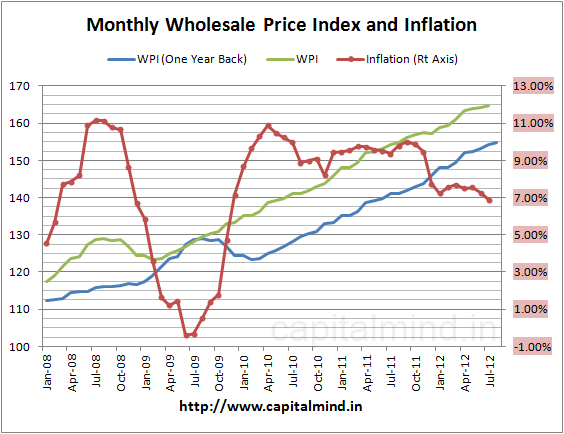 From a component perspective, it’s obvious where the drop has come from: 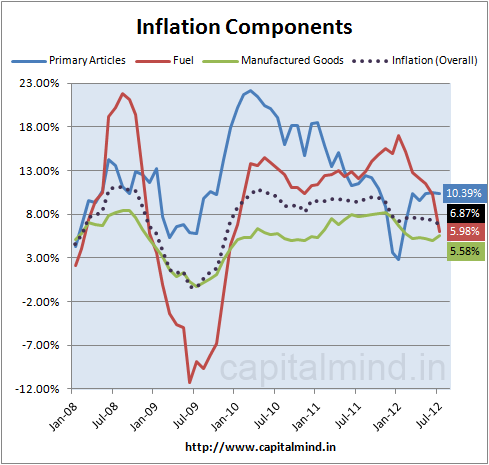 Fuel inflation is hugely down, to nearly 6% from last month’s 10%. That’s because the price of diesel was revised last July. Diesel prices have been unchanged since then, due to government control and artificial subsidies. Petrol, though, is up about 9%.

Diesel is about 4.65% of the index. Inflation in it was about 7% last month, and is now unchanged, so effectively, diesel prices were responsible for nearly all the drop in inflation. Since it’s artificially held down, and widely expected to be raised again due to a widening fiscal deficit (the government shoulders the burden of the fixed diesel price being too low), we can conclude that this drop in inflation isn’t very sustainable.

Another negative is that manufactured goods – which is 65% of the index – is starting to move up again. The WPI isn’t very relevant to most of us – the CPI, which is currently at double digits, will give us a clearer picture in a few days.