In an earlier post (Has India Plunged Into Recession? GDP Data Fudge Reveals Details) I spoke of how the import-export data was likely to be heavily wrong. The RBI has released the Balance of Payments data for Jan-Mar 2012 and it turns out that indeed, I was right.

The GDP figures (released by CSO, which comes under MOSPI, a government ministry) showed this for Q4 2011-12: 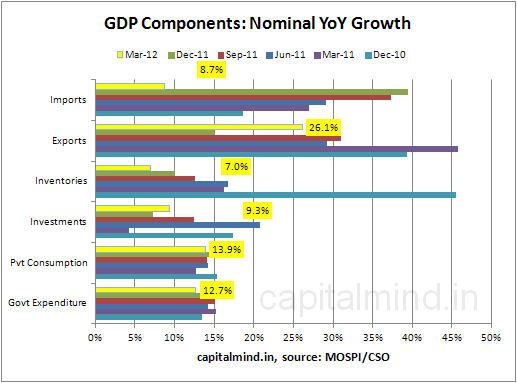 First, the total imports and exports figure was wrong.

Note: All data is at “current prices” (that is, not adjusted for inflation)

Essentially, exports were overstated by 13% and imports were understated by 21%. That’s a huge difference, and will take the GDP growth into negative territory.

Even I was wrong, it seems, having understated the deficit by about 5%. The net export is about (-170,926 cr.), negative because we’ve imported more than exports. The GDP data had said we exported 48,000 cr. more than our imports in Q4 FY12.

Since real growth will subtract inflation, which is running at 7%, we should have seen negative growth (or, in better english, a contraction in real GDP) in the last quarter of 2011-12. Of course, you need two consecutive quarters of negative GDP growth to qualify for a recession but we haven’t seen such a bleed in a long long time.