Inflation data comes riddled with past revisions that make the headline figure of 7.25% (an improvement over the 7.55% last month) feel like a farce. If you keep revising past announced numbers, all upward, and with impunity, there is hardly a chance you’ll be taken seriously. But then the WPI is what is used to calculate "real" GDP, so it can’t be ignored either. 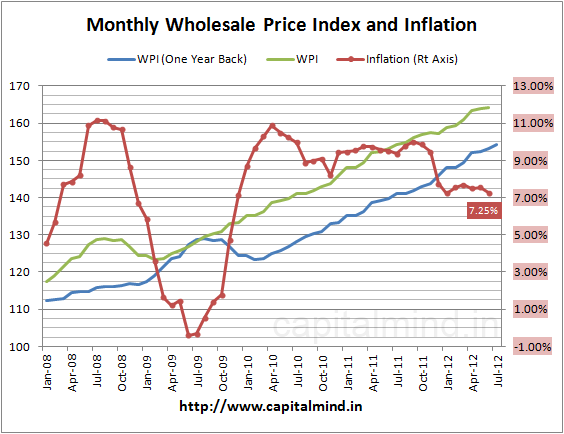 It might seem like the green line above is "flattening" but remember that even in March, it looked like the Green line was flattening – except, when the eventually revised the numbers, it looks like a horrific climb. I expect the June figures to be revised upwards too.

Look at the revisions this time. It’s not just the two month ago figure – they have also revised the Jan and Feb numbers up. So it’s no use focussing on the current number – they always look good until they’re revised. And they can’t even get the direction right.

And then, the components: 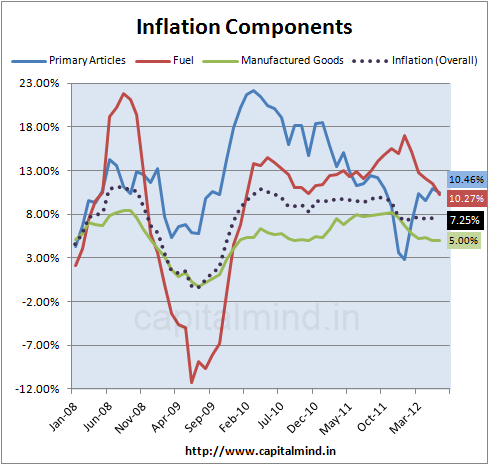 The only saving grace is that the Manufactured Goods piece is down to 5%, which inspires a slight confidence that things are not getting out of hand. Yet, it looks like that number is more easily "massaged" since it is not something you can easily cross-check (whereas you can do with prices of fuel and most primary commodities).

At this point, the focus is on whether the RBI will cut rates. The answer is most likely, no, going by the recent statements we have been hearing about sacrificing growth to control inflation, and by looking at the past revisions this month has seen. Also, CPI data is awaited and if it is still in double digits, we might as well give up on a rate cut. Plus, the dollar has risen – it’s impact on inflation will take a few months, perhaps. On the other hand, banks are showing great profitability in what should be "troubled" times – and there is no problem with rupee liquidity – so it seems that all the benefit of the last rate cut has been taken by banks and not passed on…which is a reason the RBI might want to stay put. Eventually, one day, they will have to make a choice – save the banking system, or save the current set of banks. I hope they choose the former.