The Reserve Bank of India sold just 275 million dollars in April, even as the Dollar Rupee exchange rate rose from 51.1 to 52.5. Data from the RBI Bulletin yesterday shows traded amounts by the RBI in April. 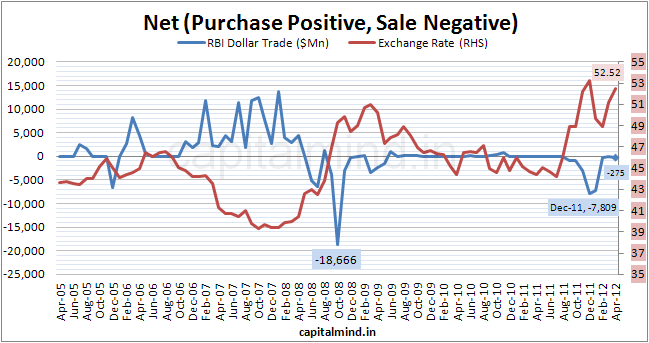 The dollar has been seriously volatile, and the RBI has intervened heavily earlier. When the rupee fell to 54 in December 2011, the RBI picked up its purchases and sold nearly $8 billion of dollars, which helped the rupee recover in Jan-Feb. But that was short lived as the rupee again slid after February, as the import-export gap continued to widen and capital fund flows were stunted. 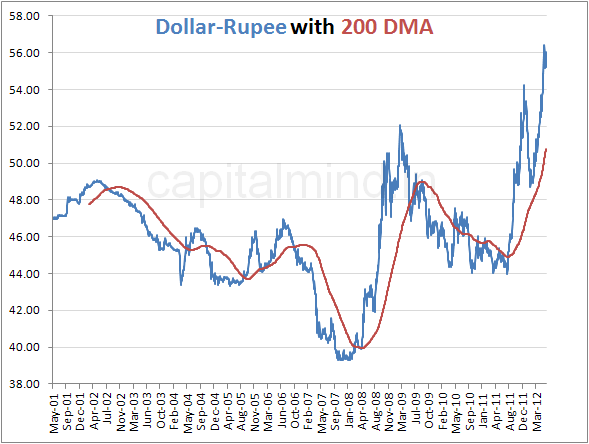 We don’t know what the RBI did in May. We’ll only know in July since the data is released with a 2 month lag.

What we know: The RBI conducts OMO auctions to fill the liquidity void it creates when it sells dollars. That means, to replenish the rupees it takes out of the banking system when it sells dollars, it uses rupees to buy government bonds and thus money comes back in. The OMO situation over the last few years: 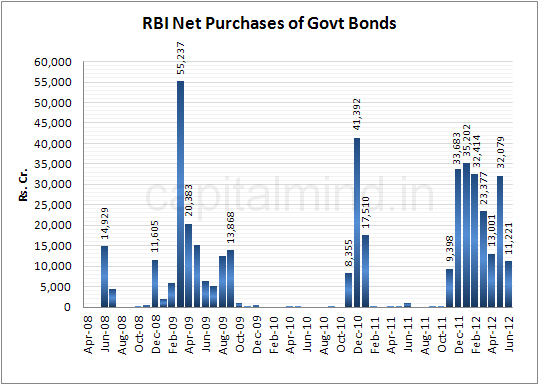 There was a temporary drop in the purchases of bonds in April, but regular service has resumed, as you can see.

On a different note: there were no OMO auctions in April. All the bonds bought seem to be oil bonds, according to the bulletin. Oil bonds, if you recall right, were what were given to oil companies as the government participation in the oil subsidy. They have not been able to sell those bonds easily. RBI must have bought oil bonds in April, directly from the oil companies, to help pay for crude imports. This will still mean they have to buy dollars and sell rupees in the open market to pay for the oil. There is no direct way for the RBI to sell dollars to oil importers, so this is a workaround.