Can also read: Why Gold is Such a Good Investment?

And: RBI, A Substantial Contributor To Inflation?

Consider the alternate explanation to inflation: It’s the RBI’s fault. If you have more money chasing the same goods, you get inflation. The Reserve Bank of India controls how much of our currency is printed, and this along with bank reserves* forms the monetary base of India. This is called “Reserve Money”.

(* Remember the Cash Reserve Ratio (CRR)? That’s what banks keep with the RBI) 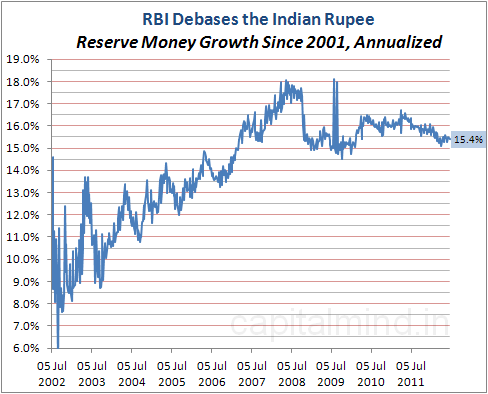 The graph plots an annualized growth since 2001 (which means the 2006 data point means how much has reserve money grown in the five years since 2001, annualized).

The graph remains steadily above 10%.

Current reserves are 14.68 trillion (lakh crore)+. This is split into:

Currency: 11.29 trillion
Bank Reserves: 3.38 trillion
There are tiny “other” pieces that add up.

Most of our reserve money comes from currency printed.

Some debasement could be good. You might argue that the RBI has to debase to make room for productivity improvements to keep prices even. Essentially it means there are more goods today than yesterday, so you increase the reserve money by the same percentage. (I don’t particularly like that argument since it has been proved wrong in, say, technology, where productivity benefits have reduced prices consistently and things haven’t been bad) Even by that argument, the 15%+ growth is unexplainable; our productivity growth has been, by my estimates, a max of 5-6% a year. Subtract that, and voila, you get the 10% inflation we are seeing today.

Reserve Money growth affects inflation with a lag, when the economy responds with growth. The US fed (and Japan) can get away with their debasements because there is no growth; when that happens, they will have to find ways to slow the money supply growth.

A side effect of cutting down reserve money growth is that banks get no money, and call rates will zoom up (as they did, upto 100% in the 90s). This could take a few banks out of business, or at least hurt the banking system.

The root cause of the massive debasement has been RBI’s consistent buying of dollars and printing rupees to pay for them. This has happened in much of the 00’s. Only recently – the last year or so – you find the RBI selling dollars instead of buying, and lo and behold, the reserve money growth has slowed. (But it has picked up in the last few months) 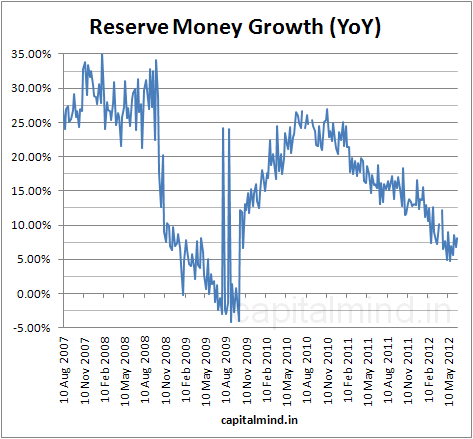 The next thing to wonder is what is happening to the broad money supply. When reserve money comes into the system, the banks run their magic on it and “multiply” it to a higher amount. This is the concept of Fractional Reserve Banking.  Broad Money Supply (M3) is now at Rs. 76 trillion (lakh cr.) and counting. This has grown substantially, at over 15% a year recently and 26% annualized since 2006! (It was just Rs. 52 trillion in 2009 and 26 trillion in 2006)

But the recent rate cuts and CRR cuts have resulted in an increase in both M3 growth and base money growth. (To avoid double counting, the graph below uses only the “currency printed” part of reserve money) 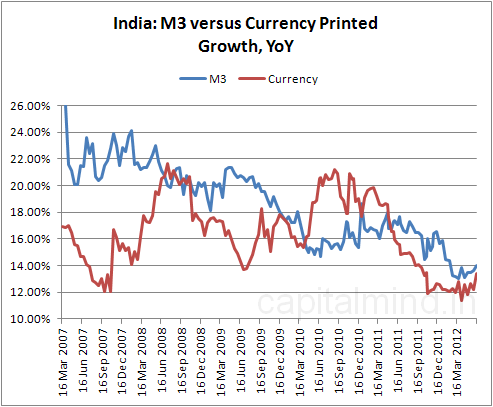 Unless we can temper growth in M3 and reserve money, we will see inflation come back. This will happen even if the government gets its act together. More debasement will happen naturally as black money gets “converted” to white, or as rural people get access to banks and put their money there instead (bank deposits will increase, and thus reserves will increase).

You see why Gold is good? When your currency is getting debased every year, why would you not want to hold something else as a store of value? To those gurus telling us to stop buying gold to help the country, kindly tell the RBI to stop debasing our currency first.